We left camp early this morning, before sunrise, although it was fairly light as we had a three-quarter moon, high in the cloudless sky. Usually when we cross the small stream into the park we are greeted by many zebra, gazelles and giraffe. This morning it was just a lone Hyena. The plains animals had moved out further away from the edge of the park due to the huge number of Maasai cows invading their space, and the reason for this is drought. It is very, very dry at the moment, the grass is mostly pale in colour, like straw and lying flat on the ground due to lack of water, obviously this gives no nourishment to the cows on which the Maasai depend for their livelihood, so, they are forced to take their cows out into the park at night, retuning each morning. Sometimes walking long distances to where the grass is greener, despite the dangers of the wild animals, in order to keep their cows alive.

So, after the brief sighting of the Hyena the second animal we encounter is our local male cheetah, he also has moved further out, following the food. We reach him just as the sun is rising and he looks like he is ready to hunt. We gave him lots of space, positioning ourselves on the other side of a group of Impala that he is focused on. Unfortunately, not all drivers can read the signs and one Landcruiser drove up too close to the cheetah, blocking his view of the prey, so he relaxed for a while but continued to scan the area for another opportunity.

Cheetahs and in fact all predators need to have patience, and that also applies to people who want to witness one of the predators hunting. Cheetahs have a success rate of around 50% while for Lions and leopards it is only around 30%

The cheetah then stands and starts travelling to find more prey, marking his territory on the trees as he passes. We follow him for quite a distance, through bush, up over hills, I notice that when he spots something interesting his tail goes up and twitches in excitement. It is already very windy this morning but as we reach the top of the hill it’s like a gale blowing through the jeep and since the cheetah has now taken shelter under one of the bushes we head down.

After some time of cruising the Sopa pride territory, Alison spots 2 lions, a female and an adolescent. But, as often happens, they are on the other side of a small stream with very steep sides, so we had to find a place for the jeep to cross. This means first deciding which direction to follow the stream, then looking at, and testing different spots to see if they are viable crossing points. Mostly this involves the guide checking out the ground on foot to see how soft or muddy the ground is and assessing the chances of not getting stuck.

Finally, we make it and drive up close to the two sleeping lions. The younger one is hiding in the bush; I can only just make him out. The female looks up at us when we arrive but loses interest very quickly, we sit with her for a while until the younger one comes out of hiding, rubs up against his or her mother and settles down. It looks like they are settled for the day, so we move on to try and find the blackrock females.

On the way we pass a small herd of Elephants, a family by the looks of it with members of all sizes including a small baby. They were moving very fast in our direction, I’m not sure if something spooked them or they were just in a hurry, but I think they were not very happy about us being in their way.

As we entered the blackrock territory, Alison once again spots 2 lions in the distance, females, they are not too far away from a group of Zebra. Looking through the binoculars I could see that they were interested in hunting, one of the females started stalking slowly towards them, moving low in the not so long grass. So giving them a wide birth, the driver positioned the jeep closer to the Zebra, we were hopeful of seeing a kill, the female took a run at them, however, it was not to be, a Zebra sensed her, gave a warning call to the whole herd and they ran away. I have noticed that when Zebra run from lions they only run a short distance, it’s as if they instinctively know how far away they need to go, to be safe from attack. As soon as they have that space between them and the lions, they stop and turn around to watch their attackers, if the lions move closer, they move away again, keeping the same distance between them. It seems difficult for a lion to get close enough in daylight, they have a very tough job. One of the photo’s shows the lioness after her failed attempt, with all that food just out of reach. Once the females had lost the element of surprise they moved on, playfully jumping on one another as they go, probably to dissipate their pent-up energy. 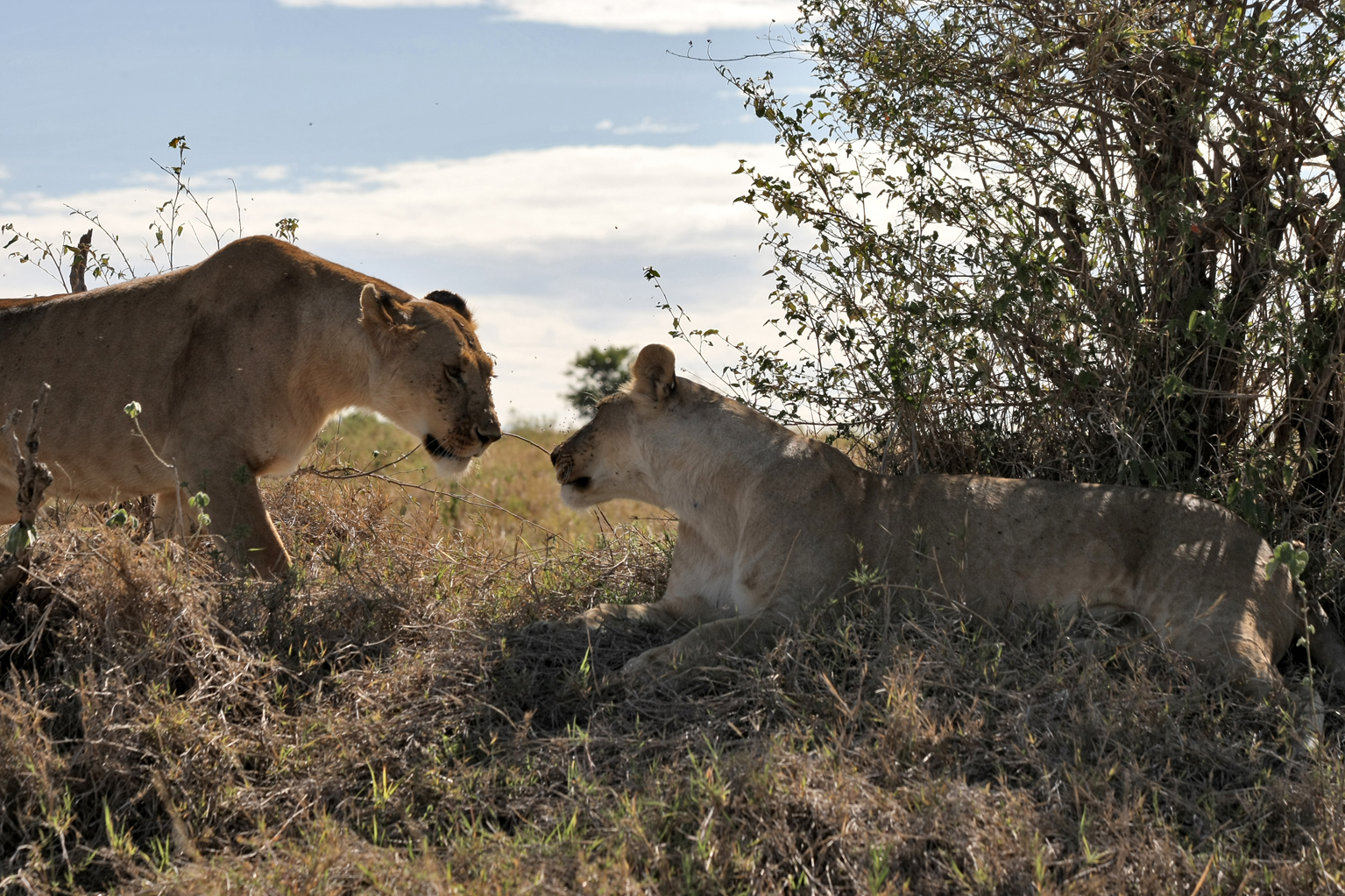 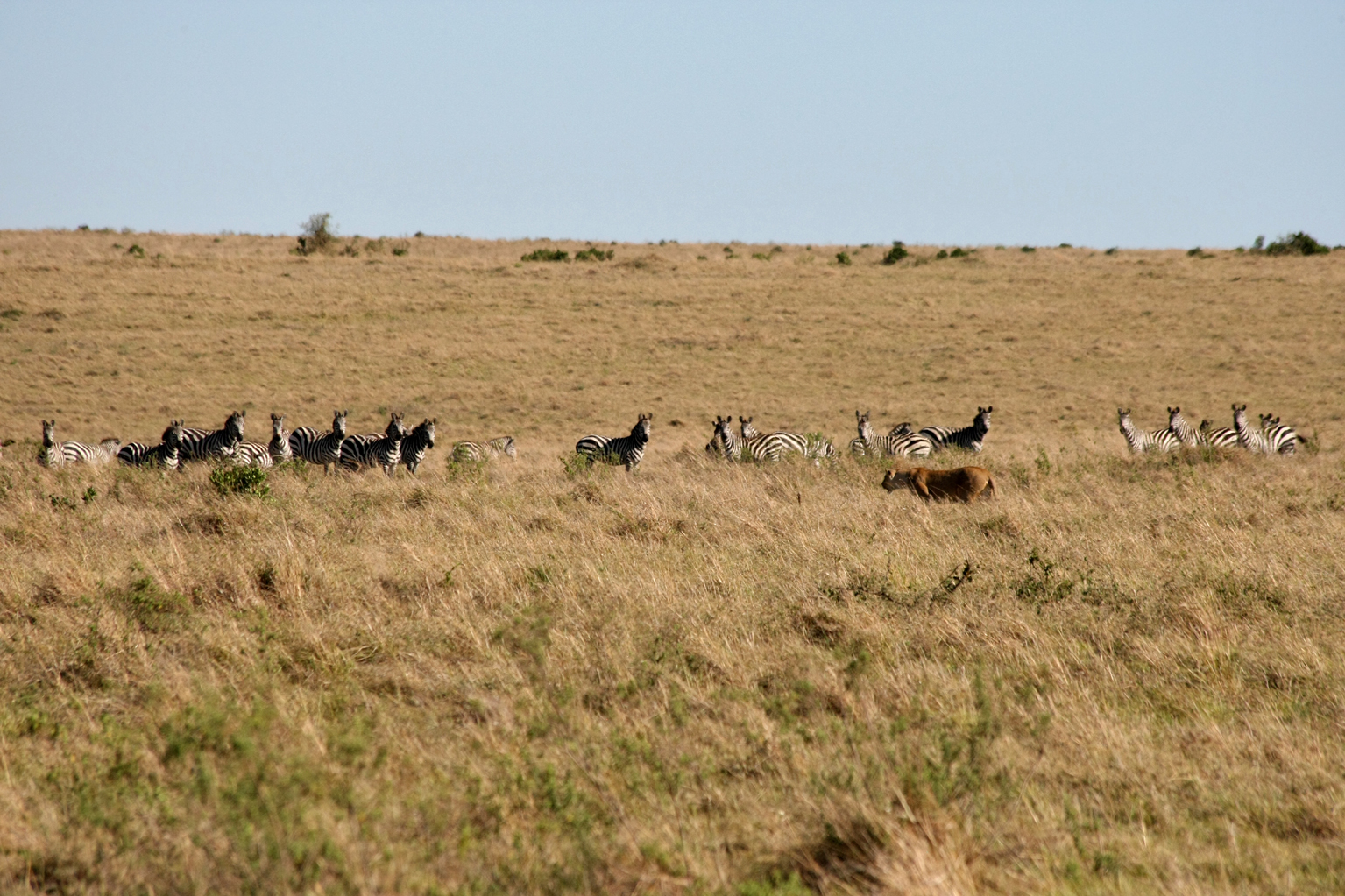 We then try to find the other females with their cubs, the females were not difficult to find, three of them were sleeping together at the edge of the black rocks, from where they got their name. The cubs however were nowhere to be seen, the mothers had hidden them in a den before coming out to sleep, so it was decided we would come back later, and we drove off to find a nice place for breakfast.

We found a perfect spot, a large tree for shade and dense bush close by for toilet. A lovely open-air restaurant.

After this we went to find a leopard with a cub near the sand river, Alison had heard that she was in the area, there was another jeep cruising up and down the river also trying to find her. Unfortunately, I had to get back to camp as I had business there, so we couldn’t search for long, it didn’t matter, there would be other days.

We took a slow drive back to the three mothers in the hope of seeing the cubs before returning to camp. We were not lucky this time, the females were in the exact same position that we had left them earlier and the cubs still in the den.

What we did see instead was 5 Ostriches, one female and five males. It looked like 2 of the males were interested in mating as they stayed close to the female and were squabbling with each other. The 2 males took it in turns of spreading their feathers and doing a sort of dance, this is the behavior they exhibit when trying to attract the attention of a female, however this particular female looked to be more interested in eating than in mating.

And so, it was time to return, as we approached the camp antelope and giraffe had returned to the plains near our camp, even though a few cows and Maasai were still around, you can see how close they get to each other in one of the photos.