So, this morning we left camp again at around 7am heading to where the Sopa pride were last seen. It’s never easy to find a particular pride of lions, typically their territory is between 20 sq km and 400 sq km, you can imagine this is a lot of ground to cover and generally when not eating they rest in the shade of a bush which makes them even more difficult to spot, but I felt confident that our guide wouldn’t let us down, I think I mentioned what an amazing job he does and how much experience he has in tracking the animals. 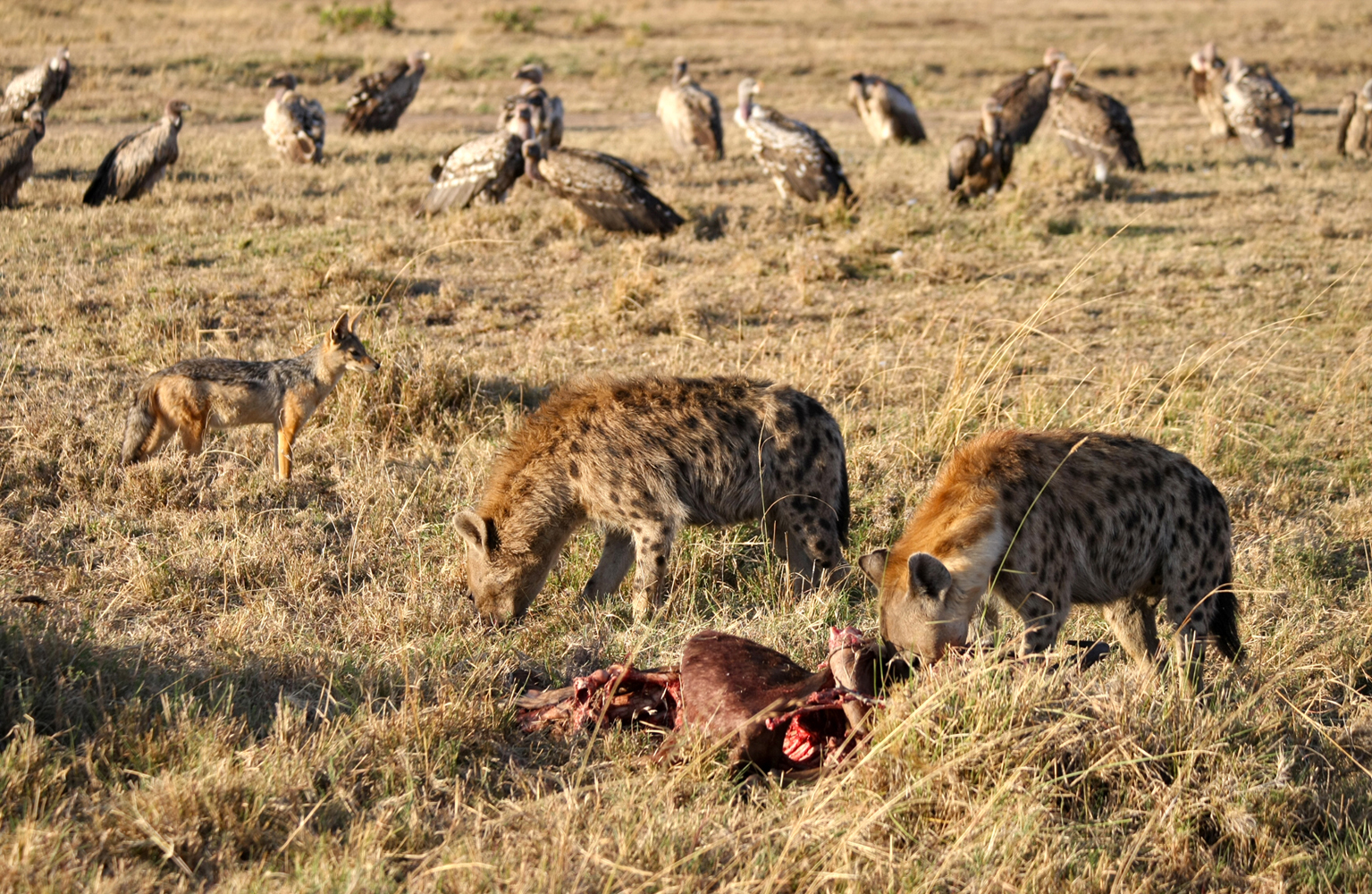 Although our main objective was to check in with the Sopa pride there were so many other things to see on the way. shortly after leaving the camp, we encountered scavengers around an earlier kill, I was surprised by how orderly it seemed to be, at other kills I have seen there is usually much fighting and squabbling. The Hyenas being the top scavengers were in cracking bones of what was once a wildebeest, of the 4 Hyenas only one was eating, the others waiting patiently for their turn. There is a strict hierarchy within the Hyena clan. Two Jackals kept darting in every now and then to take a small piece of something, which the Hyenas allowed, and beyond them, the vultures, the ultimate scavengers were also waiting their turn.

It was a day for birds today, before we even reached lion territory we first spotted a Goshawk and as Ken went to photograph it, a beautiful iridescent blue starling took off from the tree which he was able to capture. Next there was a long-crested eagle which posed for the camera, finally the largest of the Eagles here in the Mara, the Martial Eagle. Martial eagles are excellent hunters, they have been known to catch and carry off young Dik Dik’s which are the smallest antelope here, but still quite heavy for an eagle to lift.

Finally, we caught up with the Sopa pride, first 2 adolescent males sleeping in the shade of a small bush and hiding in the next bush was a young female. It wasn’t long before their mother approached and went over to join them. Immediately she started to clean and groom them, this is typical lion behavior between members of the same pride, it helps with the bonding process and is lovely to witness.

A couple more lions wandered in, and we headed in the direction from which they came to find the rest of the pride. We found one group of lions tucking into what was left of a zebra and another group with a warthog. The kill lay right next to the warthog den, it looked like they had excavated the den to get them out, This pride seem to be excellent hunters. Some of the lions were heading off with different pieces of the carcass, while one female was claiming her share by protecting it, I don’t think any of the youngsters would even attempt to steal it from her.

After they had their fill, one by one they made their way into the shade near a small water hole where they could drink and relax, probably for the rest of the day so for today we leave them there, at peace.