The morning is cold. It had rained all night, not heavy rain, just that light drizzle that is so common in England or Ireland. Yesterday we had managed to get hold of the last 17 litres of diesel from the local village, so we wanted to make the most of it and stay out all day.

As expected, the rain had turned the tracks into a slippery mud. As we slowly made our way through the bush and out onto the plains a large part of the sky in front of us was a mass of colour due to the mist on the horizon. It looked so beautiful with wide bands of every colour of the rainbow. It lasted only a few seconds, just long enough for Ken to capture it before it disappeared forever. 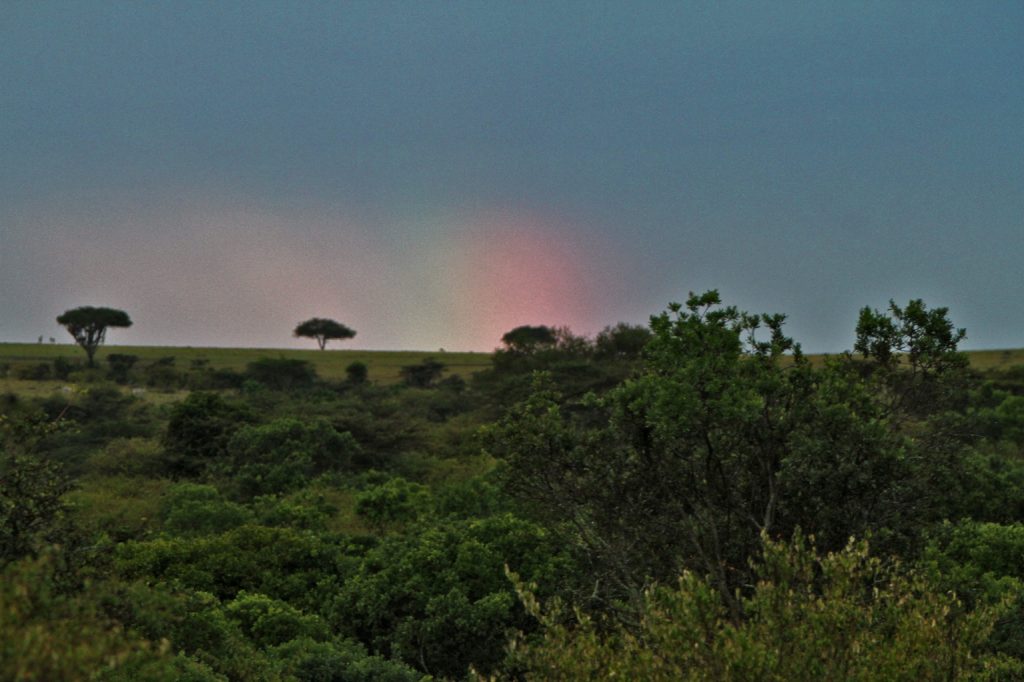 Once it rains here, the going really is tough, the vehicle seems to have a mind of its own, despite the driver doing his best to keep it under control and on the right track, if it wants to go sideways or slide from side to side, it will. Those that have been to the Mara in the rain know what I am talking about, those that have not visited us yet may find it a little disconcerting at first. But my attitude was relaxed, I was away from the camp with all the small daily chores that must be attended to and if we get stuck then so be it, I can think of worse places to get stranded.

Two Hyena pass us as they head into the bush after a night of scavenging and as we make our way to the main road and relative safety, we pass a line of hippo footprints leading to the river, so we head in their direction to see if we can see them. What alerts us to their position is the spray of water as they break the surface, we head over and they are four, almost fully submerged. They are certainly enjoying the wet weather.

Since we are out for the whole day, we decide to go further afield just to see what we can find. Sometimes you see something surprising and funny at the same time, like a flock of guinea fowl with small babies picking at the insects on the road, when the car approaches them, they start running, surprisingly fast for a creature with such short legs, even the babies are fast with legs that are even shorter. But they don’t run to the side, away from the road, they stick to the track running in front of us for a while before realizing they have another option. They look so comical. 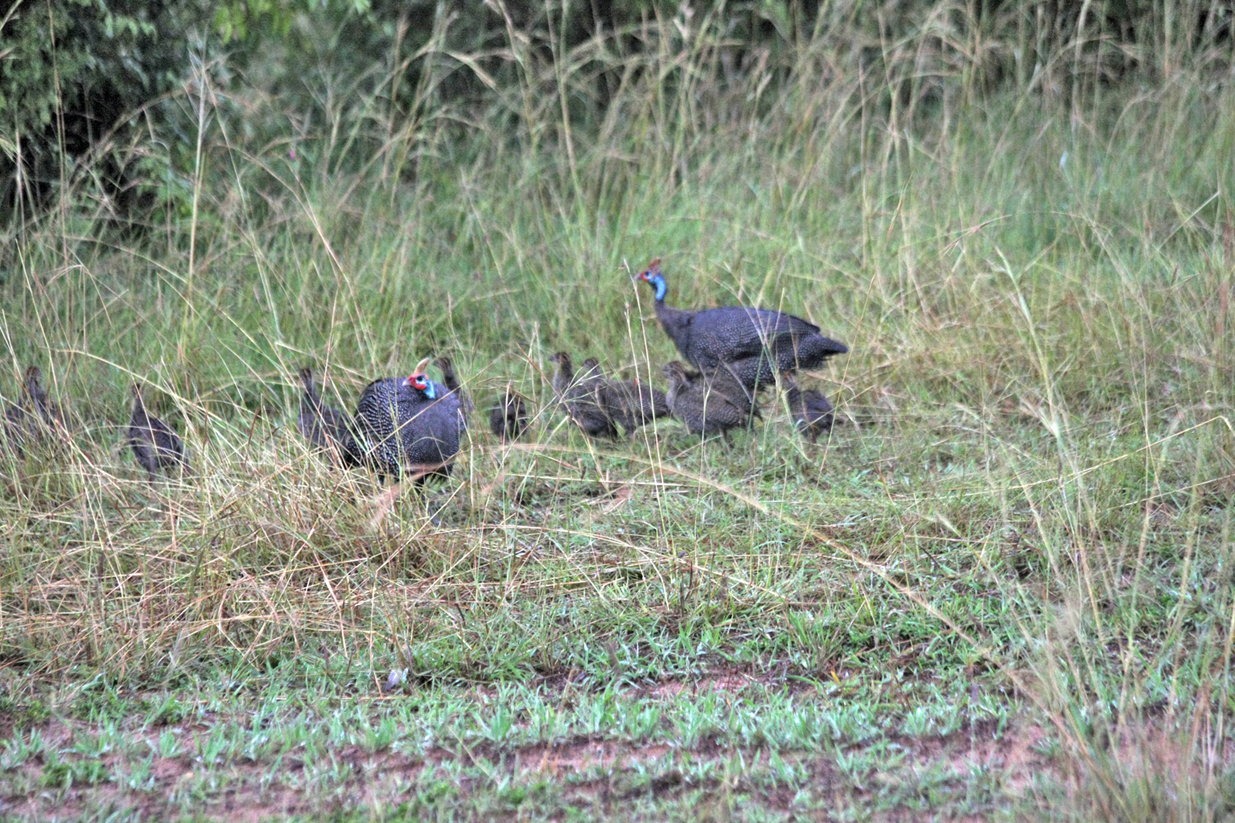 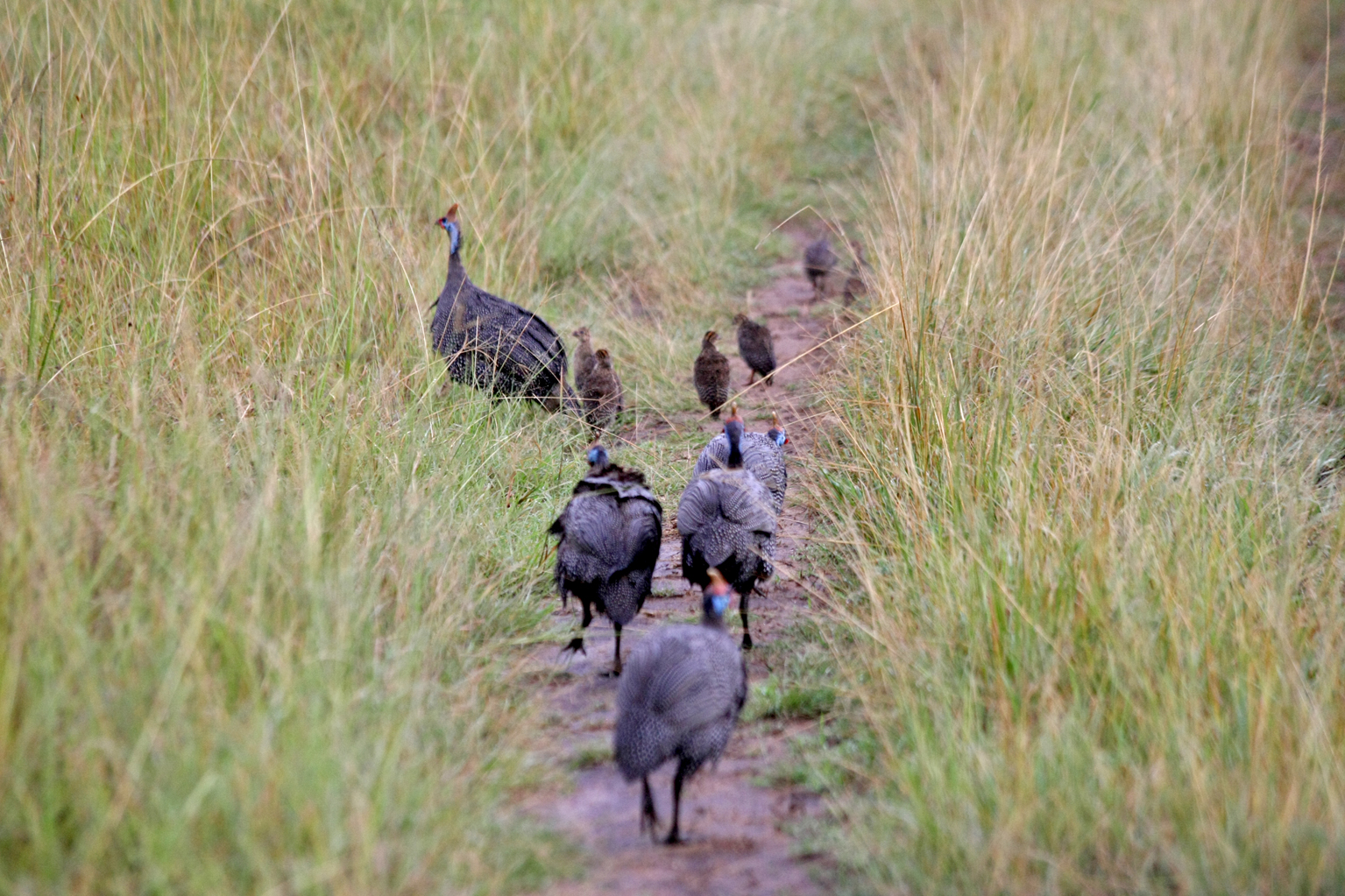 Just as we are passing a rather large termite mound my attention is caught by a slight movement. It is a mongoose who had just popped his head out of one of the tunnels at the top of the mound and another one appears lower down, they probably felt the vibration of the vehicle in their den and wanted to check it out, they do look quite curious. On the other side of the road is another termite mound, this one with a Tawney Eagle perched on top. An ideal place to scan the area for possible prey, he even looks big enough to take a mongoose given the chance.

After around half an hour of, I was going to say a relaxing drive, but this drive is anything but relaxing, we come upon two sub-adult male lions. We park the car just off the track and they walk towards us. I am photographing one of them as he gets closer and closer, until he is just too close to photograph anymore.

He is nearly as tall as the open window on the jeep which I am leaning out of. We are looking at each other eye to eye and I suddenly realise I am in a staring competition with a male lion, albeit a young one, he nevertheless looks quite powerful. So, I am the first to break off and move back into my seat. Fortunately, these two show no aggression, just curiosity as they continue to move closer. The car rocks as they settle themselves against it to take advantage of the small amount of shade afforded by the jeep.

Now they are relaxing I lean out of the window again and look down on them when one of them sneezes, now I don’t know if anyone has heard a lion sneeze when it is right next to you, but it startled me so much that I jumped back into my seat again.

One of them even tries to get underneath the jeep, he gets halfway but finds he is too big, so he pulls out, looks at the space and has another go with the same result, he then resigns himself to laying by the side of the front wheel. This is fine but is a problem when we want to move. The driver switches on the engine, which he thinks will disturb the lion, but it doesn’t, they both totally ignore it and stay where they are. So, the driver puts it in reverse, turns the tyres and tries to inch his way backwards without touching the sleeping lion. Still they don’t move. It’s not until we are completely clear of them, and they realise they have lost their shade that they finally get up and walk off. We find out later that these two are from the Topi pride.

Before coming to the Maasai Mara I never in my life imagined that I would have the opportunity to get so up close and personal with lions in the wild. This is truly an amazing world.

We have breakfast under a tree not too far away and as we eat Alison points out a fully grown male lion in the distance, and also points to a patch of ground next to us that has recently been vacated by that same fully grown male lion. After we’ve eaten, we drive over to him to find him relaxing in a bush, which is natural for a male lion during the day. Alison suspects he is one of the five males from the black rock pride, so we explore the surrounding area for the other four.

We find two more of them sleeping next to a bush. As we get closer, we can see that they both have injuries to their face, we now know that these are brothers, Olobor and Olpadan also from the blackrock pride who recently got into a territorial fight with another male Lion, Olope from the Moniko pride. It was reported to be a fierce fight, two against one, Olope is said to have fought ferociously before being mauled to death leaving Olpadan with life threatening injuries. The vet had to go in to treat Olpadan. You will see from the photos of the second lion that even though he has is eyes closed one of them is in a very bad way and we saw signs of the green antibiotic solution that had been applied to his body. Of course, the flies didn’t help, they were both absolutely covered in them.

A little further on we found the other two males from the blackrock pride. One, with three females in the shade of a stunted tree and the other enclosed in the foliage of another nearby stunted tree together with a cub. I managed to get a photo of the cub but the lion behind him is hiding. I thought it unusual for a cub to be with his father and not his mother but obviously he was comfortable there. 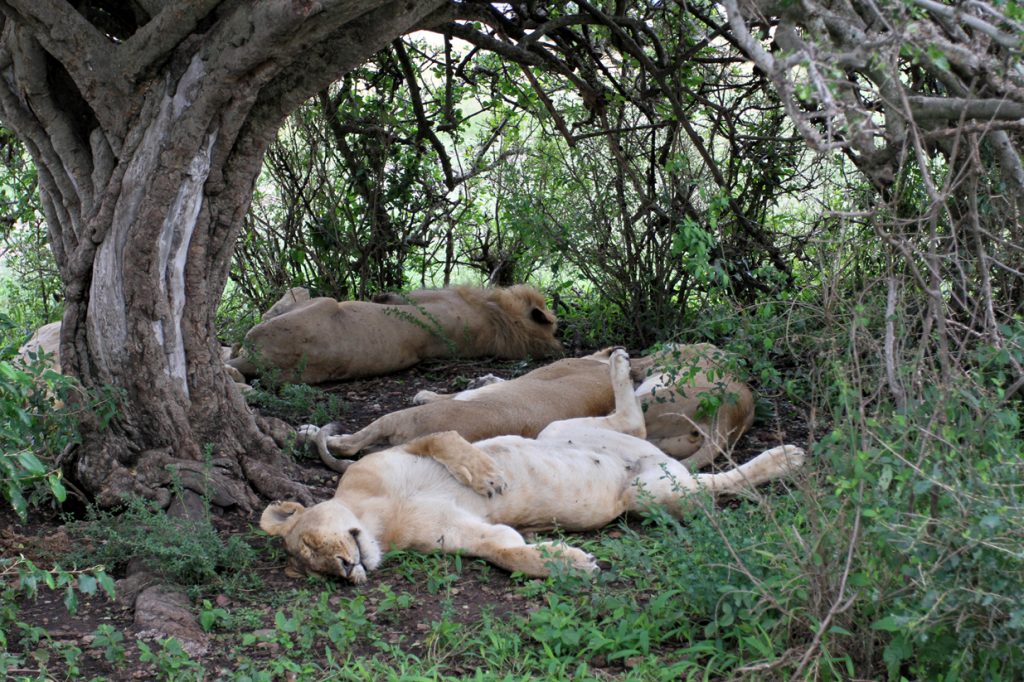 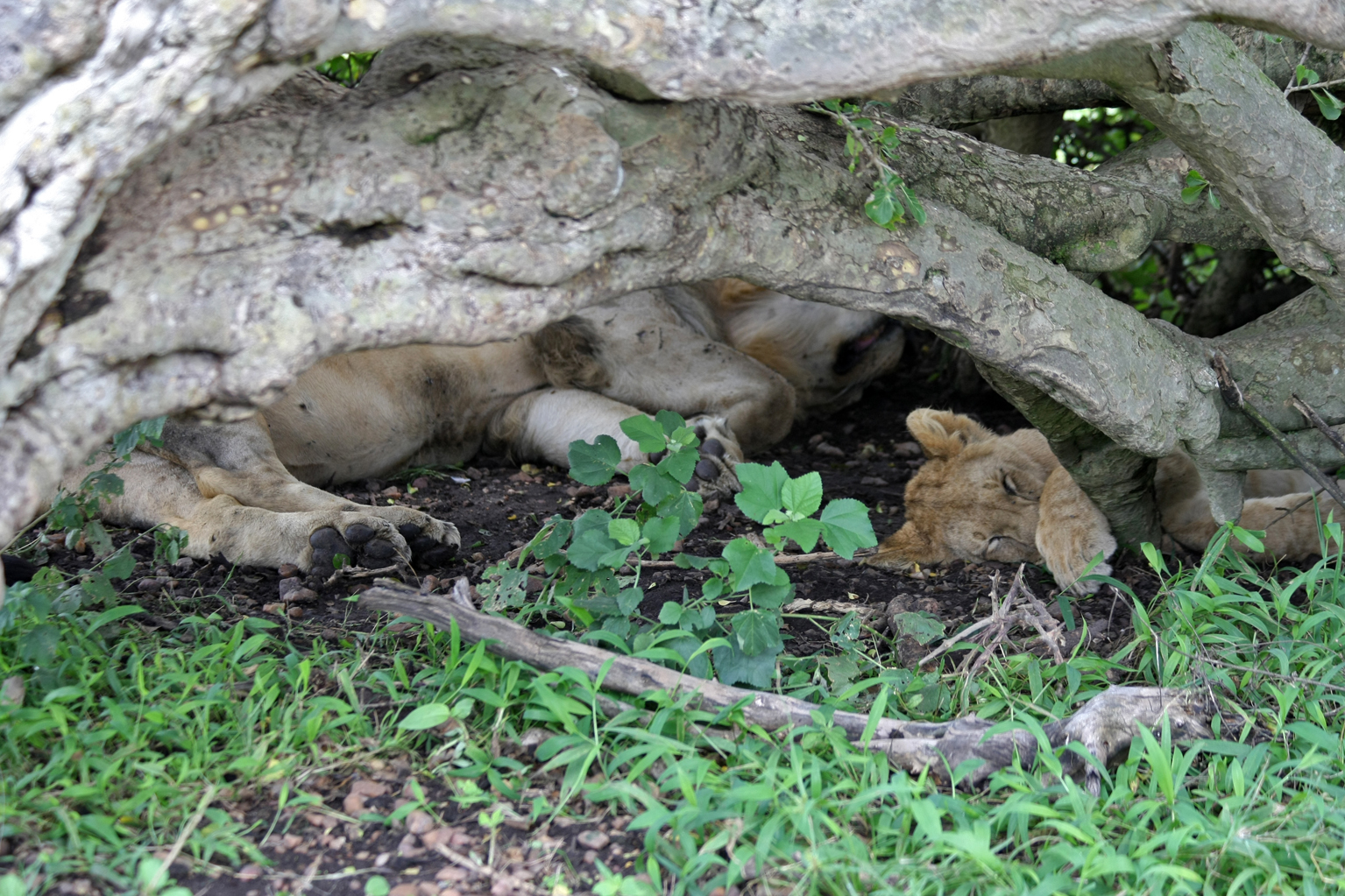 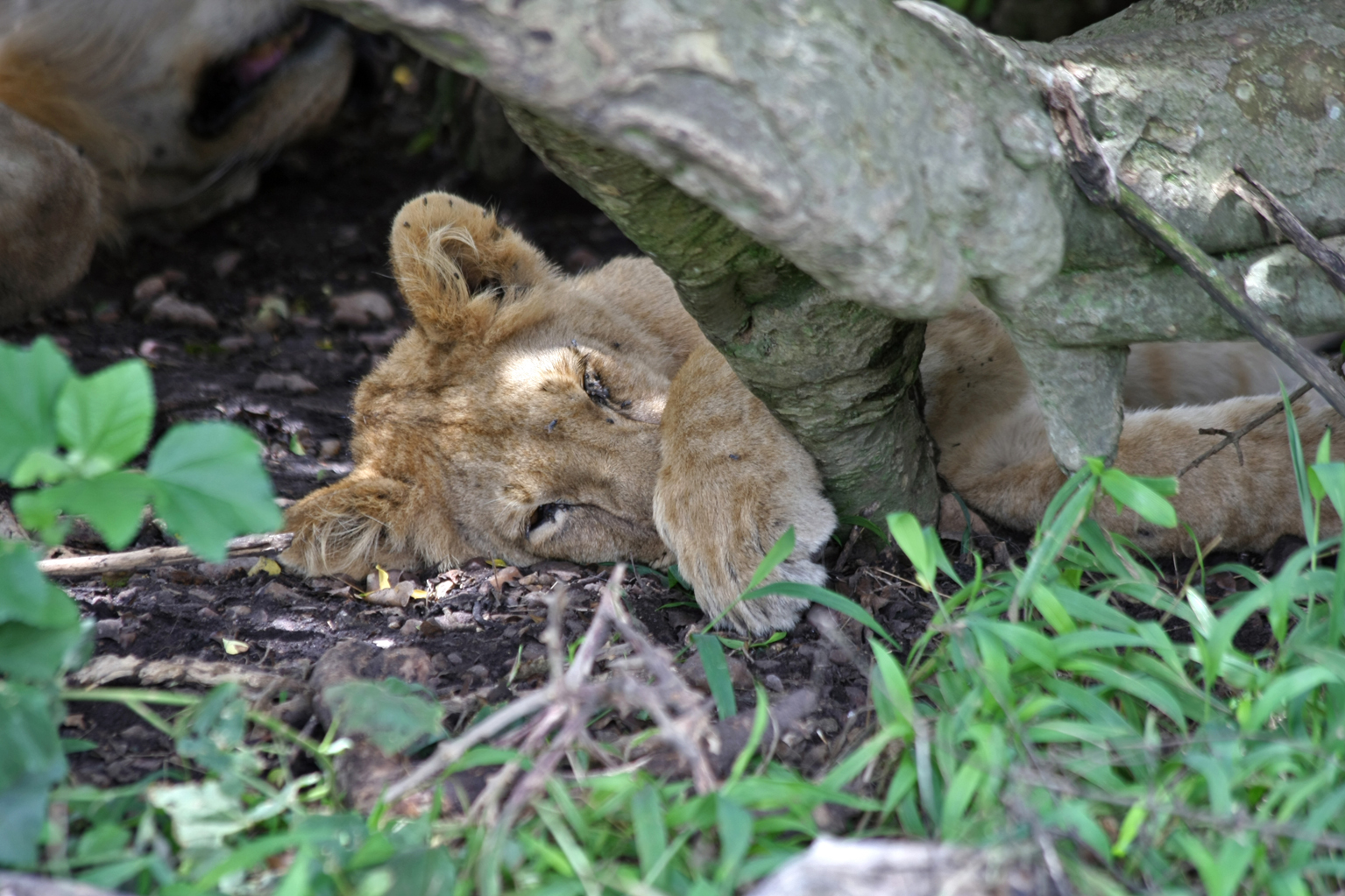 One of our guests recently, after returning from a game drive said, “we saw lions, they are so lazy, they do nothing.” And I guess she has a point because most of the time all they do is sleep, but it’s not always easy being a male lion as evidenced by Olobor and Olpadan. Male lions must protect their territory and the pride.

It had been a fantastic morning; I was expecting a quiet day but so far what I had experienced had far exceeded my expectations and we still had the whole afternoon ahead of us. I will continue with our adventures in the next blog.

One reply on “Up Close and Personal”

That sounds like a fun, fun day! My first time reading your blog and I absolutely love it. I’ll be tuning in for now on.