So, to continue, Alison, our guide had heard where the two females were with their young cubs, and we headed over to where they might be. On the way, we came across 3 male lions, these are brothers and were part of the Sopa pride until they reached maturity and had to leave. Now they are with the females from the BlackRock pride and more than likely fathered the cubs that we were on our way to see. They were doing what most male lions do during the day, which is absolutely nothing, just lazing in the shade of the bush. From what I saw of them they are fine examples of  male lions, large and powerful. 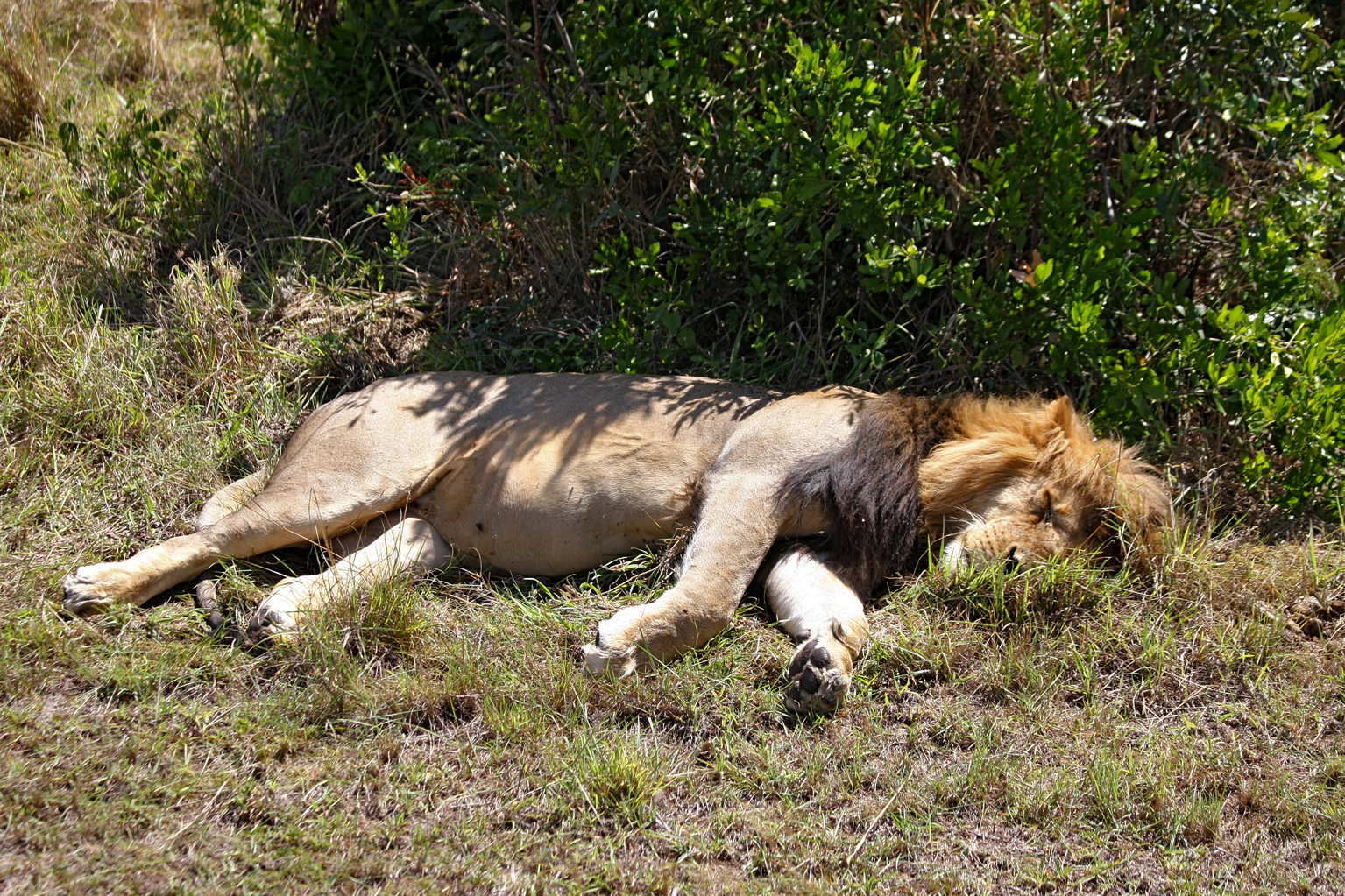 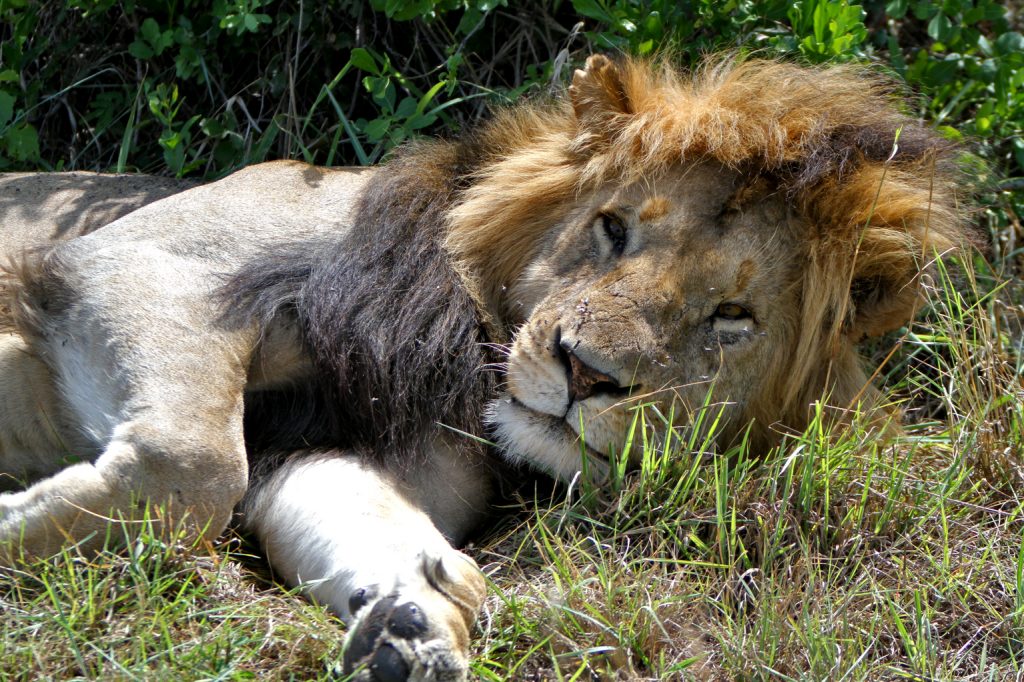 We drove on and after another 10 minutes or so we saw a female lion walking in the distance, she was coming our way. As we got closer to her, we could see that she had 3 young cubs with her, the cubs which were around 3 months old, were playing around as they were following, if they strayed too far, she gave a low quiet grunt to call them back to her. Cubs of this age are not yet ready to join the pride, the mother only takes them to join the pride when they are able to hold their own at a kill, otherwise they would starve and die.

We followed for a while to see where she was taking them, then Alison noticed that she had a little blood on the side of her leg, and from this he concluded that she had made a kill and was now taking the cubs to it so they could eat. We stopped following, took a detour to get ahead of her and see if we could find the food. The plan worked, we found a small lifeless warthog half hidden in a bush, this was definitely where she was headed. It wasn’t long before the lioness and the cubs came into view. The driver had positioned the vehicle so that we had a good view of what was about to happen.

The mother walked right up to the carcass stopping in front of it, and it didn’t take long for the cubs to figure out what they were supposed to do with it. They were jumping on it, rolling it over and trying their utmost to get their teeth through the tough skin, into the flesh underneath. It took a full 20 minutes of working together before they managed to break through. The mother, meanwhile, had found a nice shady spot in which to sit, watch her offspring, and relax. They took a leg each and worked away, taking short breaks to take a drink in the small rock pools and get a little reassurance from their mother.

After getting a little to eat, they became tired and took a short ‘cat nap.’ Then, fully restored it was playtime, they were a delight to watch as they splashed around in the shallow rock pools, stalked, and jumped on each other. We stayed with them for a couple of hours while they played and by this time it was just past mid-day, the sun was at its highest in the cloudless sky. It was getting unbearably hot, the flies had multiplied, if that was possible. The lioness was now finishing of the warthog, both her and the warthog both covered in flies, and they were also disturbing us, so we all agreed it was time to move on.

We wanted to find the other female with cubs, so we drove back to the place where we had seen the first lioness as the 2 females would stay around the same area for protection. However, this female would be more difficult to find as her cubs were only 3 weeks old so she would be hiding somewhere to keep her cubs safe during this critical time. Lion cubs don’t open their eyes until they are at least 2 weeks old, so everything is new to these 2 cubs, and they stay close to their mother for safety.

It took us a while, slowly driving around the area, looking into many bushes. Eventually, we got lucky and found them. When we pulled up in the vehicle the cubs immediately hid behind their mother, but curiosity got the better of them and they came out to look at what this strange thing was. Once they realized it wasn’t going to hurt them, they promptly ignored us and carried on playing with each other while their mother dozed. They were very cute, but I have to say, not yet as entertaining as their older cousins.

It was now 2:30pm time for lunch so our driver took us to a nice spot in the shade of a tree next to a small river. Sitting in a tree nearby was a vervet monkey, however he didn’t try and join us for lunch. There was also a black bellied bustard, patrolling a piece of ground close by, looking for his own lunch of grasshoppers, ants, and other small insects. 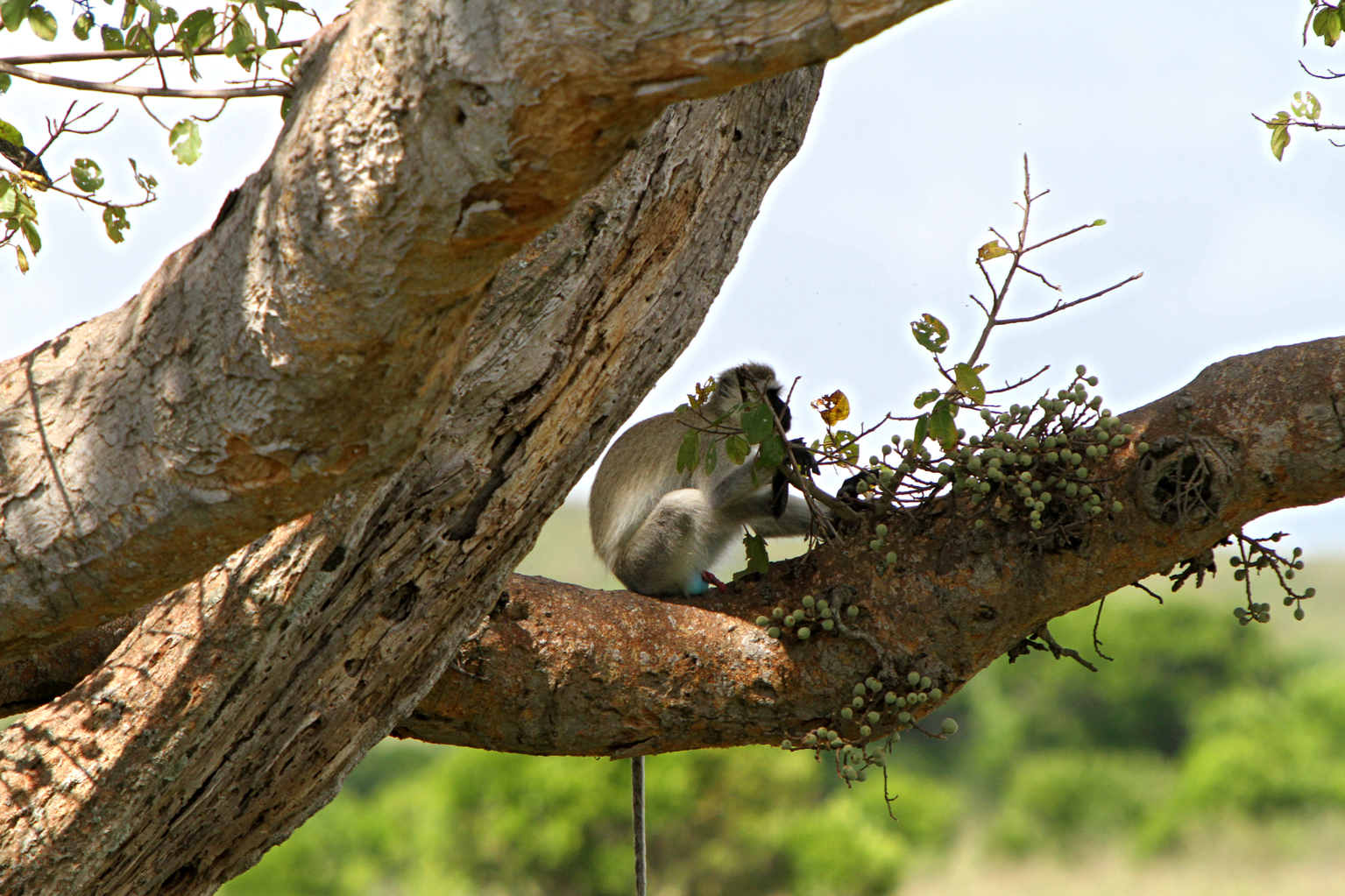 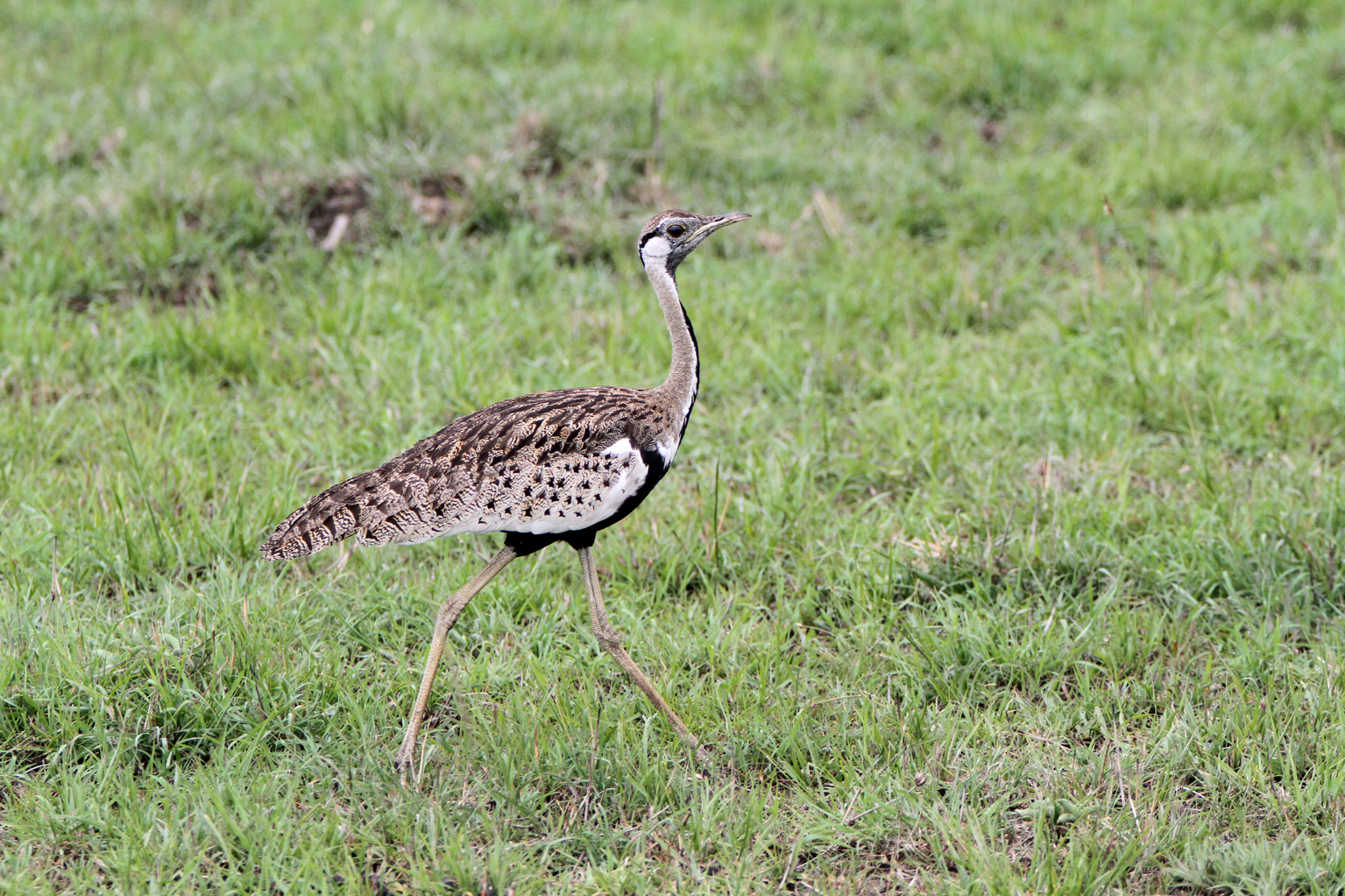 We went to the river to eat because after lunch this is where we would start our search for a female leopard by the name of Lorian and her male cub Roho. She had been sighted in the area over the last few days. Leopards tend to move around quite a bit but like to stay near a river as it is a source of water as well as food. Many animals come to the river to drink so this is where they lie in wait for them.

There were three small rivers in this area, and we searched all three before, at last finding the cub Roho. When I say the cub, he was almost fully grown maybe a year and a half to two years old. He seemed quite relaxed that we had come to join him, he did move a little further into the trees, lining the riverbank but didn’t go into hiding. His mother was nowhere to be seen so she must have gone hunting. It looked like the mother wouldn’t be back any time soon and we had to start making tracks back to camp.

On the way back Alison spotted a Serval cat in the long grass, Serval cats are very difficult to see as they are small, very shy and run away when disturbed. They stick to the long grass for cover and also because there are many rats in this kind of terrain, rats and lizards being a large part of their diet. Another animal we came across was a bushbuck on top of a mound of earth, with the distinctive markings on his chest and front legs. While bushbucks are not rare, they are not often seen. 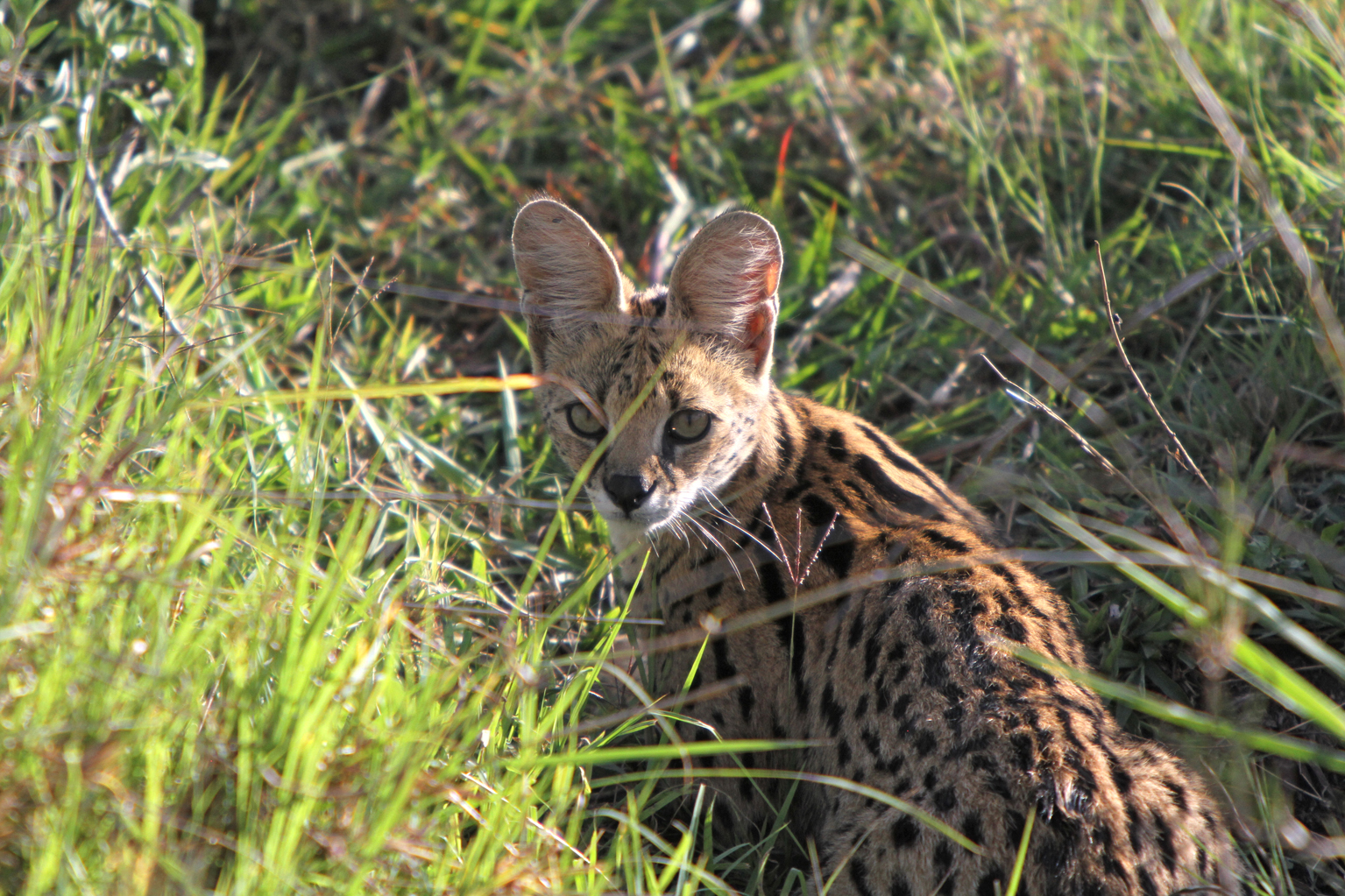 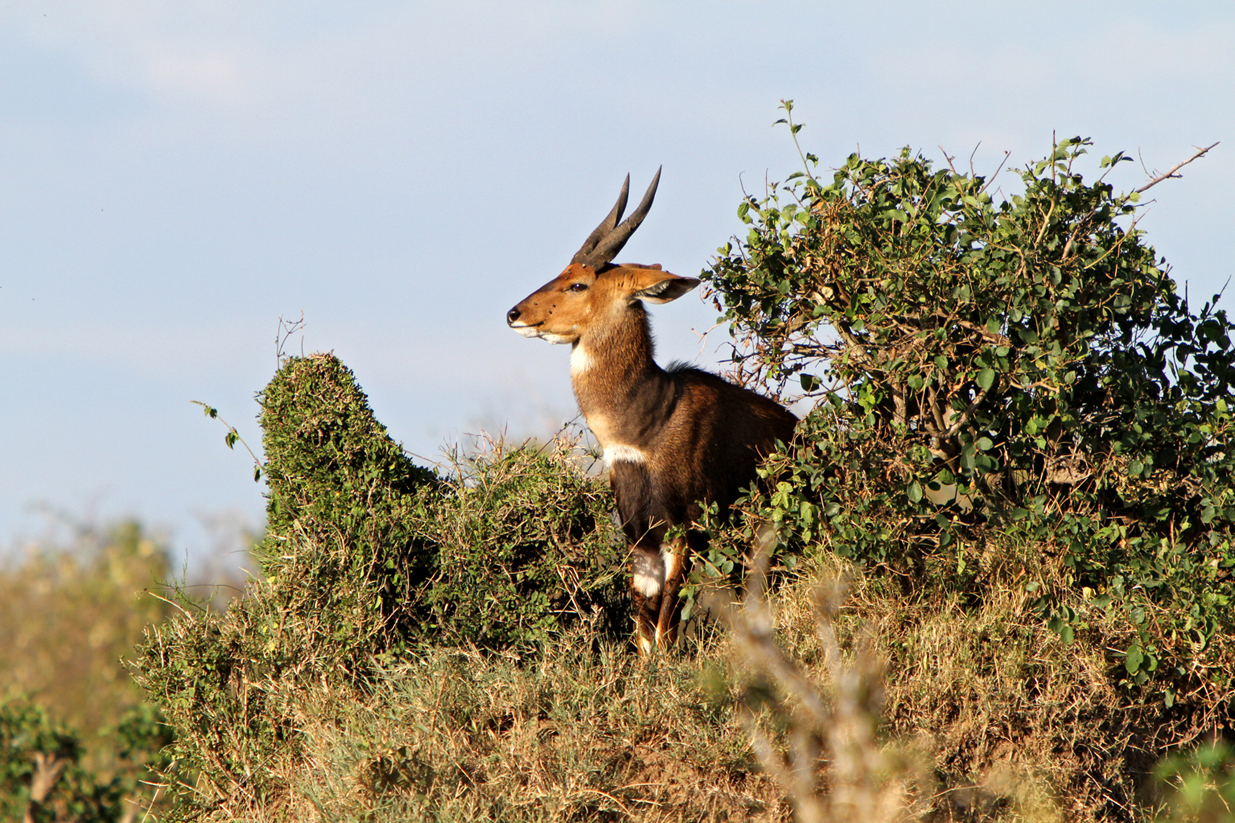 By the time we got close to the camp the light was fading and the moon was just coming up, when we noticed 3 more lionesses on an outcrop of rocks, not only that, nearby were some zebra and we felt they just might go hunting, so we waited. We didn’t have to wait long before they first stalked and then gave chase to the prey, however this time they were not successful and we had to leave as it was now getting dark, but to watch 3 lionesses hunting at dusk was a perfect end to the day.

One reply on “Dawn to Dusk Part 2”

Alison is amazing and we think the best guide/tracker in all of Africa. It was so sad hearing about the mother of the leopard and hope that the cub is ok. What a nice article and update from the Mara.