This week I was not able to go out on a game drive as I had to go to Nairobi for supplies for the camp, so my post is about the other animals that we saw on our previous game drive last week, in addition to the ‘Big Cats.’ Mostly birds, but also the Giraffe. Always on a game drive you can see Giraffe as well as Zebra and antelopes, they often get overlooked in the rush to see Lions, Leopards and Cheetah’s.

I think the Giraffe are the most elegant creatures in the park, with their long legs and the way they have of looking down on you. Their method of walking is to lift both legs of one side of the body at the same time, that, and their long stride give the impression of gliding rather than walking. Giraffes also seem to be quite curious, if not startled they will stand quite still and just look at you, like this little one who was with his mother and siblings but who came and posed for me in one of the photos.

Another of the photos shows some young male Giraffe engaged in ‘knecking’ a term to describe the way in which they slam their long necks and hard heads into each other as a way to prove their strength or to settle a dispute.

Something else overlooked by many tourists are the birds, there are around 450 species of birds in the Mara, and while I am not particularly a bird watcher, I can still admire their success as a species and in most cases, with a few exceptions, their beauty.

As we were driving from one group of lions to another, I happened to see a single elephant and a single buffalo, grazing together. This, in itself was unusual as normally they both spend their time as part of a group, in the case of buffalo’s very large groups, so I asked to get closer. This is when we noticed the two egrets right by the buffalo’s head, keeping pace as he moved through the grass. The egret and the buffalo have a symbiotic relationship, whereby the egret eats the flies and insects that are exposed as he grazes and the buffalo benefits as they also eat the flies and insects that would otherwise bother him. Another bird that has this type of relationship with the buffalo is the oxpecker, anyone who has been on safari will have seen these small birds sitting on the backs of the buffalo picking the ticks and insects from his body. 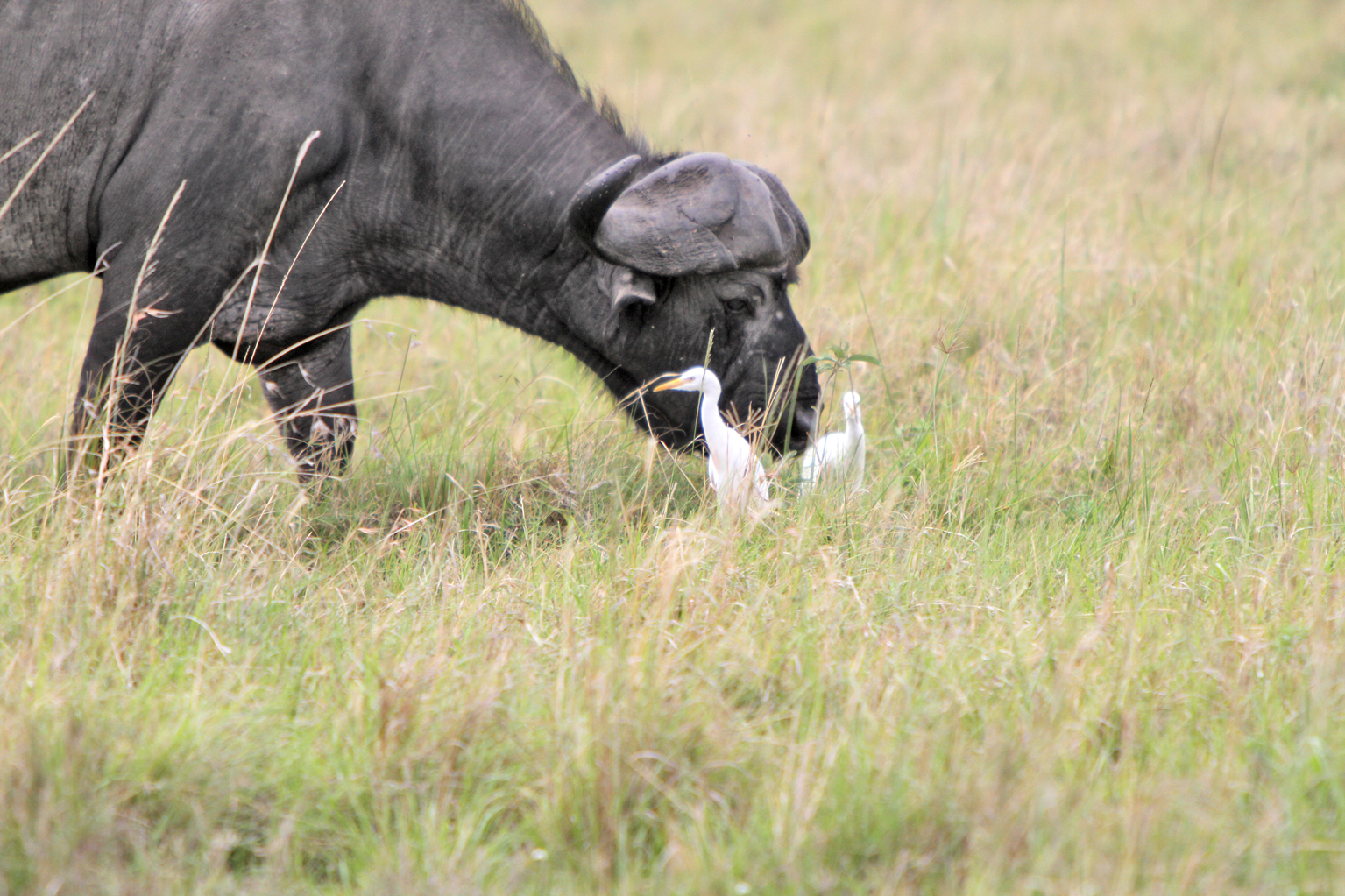 The next bird I noticed was in the air, not unusual for a bird you might think, but this one looked a little different as it had quite a large wingspan and very long legs. Alison identified it as a secretary bird, which was surprising because these birds rarely fly, preferring to stay on the ground foraging for insects in the long grass. As you can see from the photos, they look very different in flight.

A while later we had just pulled up to the group of lions when we heard a lot of noise and activity from a nearby tree, it came from the gray backed fiscal bird. These are very common birds and very social, a group of them get together and perform a lot of tail wagging and create a constant noisy babble, for what reason I have no idea, but they are difficult to ignore, unless you are a lion.

After this, down by a small stream Alison pointed out a small, colourful bird among the leaves on the branch of a tree. It took me a while to see him, it was a malachite kingfisher, these beautiful creatures are quite small, only 13cm, they sit in a tree close to a slow-moving stream or river, while their sharp eyes pick out anything moving in or over the water, they immediately dive down, catch it, and are back in the tree in a matter of seconds, very efficient hunters. 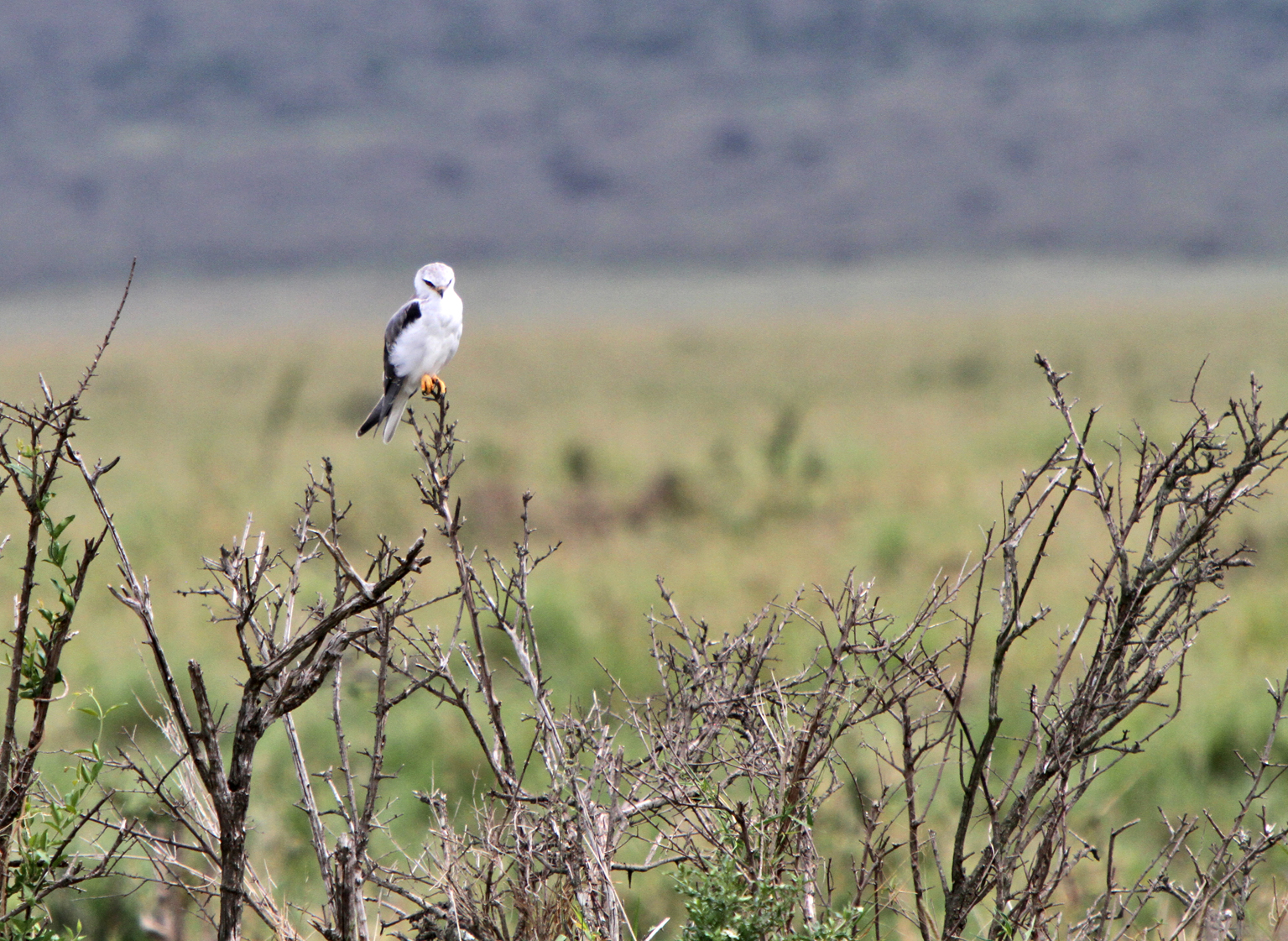 Not far away was another efficient hunter with a similar strategy. This was a black winged kite. They perch on a branch, where they sit for hours scanning the area around them, looking for small rodents, lizards, and grasshoppers, so they really need to have good eyesight. As soon as it spots something tasty to eat it swoops down, sometimes hovering, just like a hawk above its prey while deciding the best way to attack.

The next bird we came across was the hamerkop, so named because its head resembles the shape of a hammer. It’s an unassuming brown coloured bird that likes to wade in shallow ponds looking for insects to eat, but he has a hidden talent, he is a master engineer when it comes to nest building. He builds nests so large and strong that a grown man can fit inside, and it can support his weight.

They start by creating a platform made of sticks and mud, then they make an encircling wall, topped off with a domed roof. Inside, they build a nesting chamber at the widest part of the nest so there is enough room for both parents and the young. Hamerkops are compulsive nest builders, they can build 3 to 5 nests each year, even when they are not breeding. Because these nests are large and strong quite often, other, larger birds will take possession and kick the hamerkop out. The nest we saw looked like it had been claimed by Egyptian geese.

Finally on our way back to camp we stop to look at a male elephant. This elephant caught my eye because of the liquid that could be seen coming out of the elephants’ temporal glands at each side of his head. This apparently is normal for male elephants, it is called musth and occurs each year for a couple of months, during this time the elephant can become more aggressive. This elephant looked fairly young to me because of his size, he was by himself, eating the grass and moving slowly, he didn’t look particularly aggressive, which was a good thing for us.

One reply on “Elegance and Engineering”

Excellent as always Marie . Love to read the stories of your adventures in the park .