It’s been two weeks since my last blog, unfortunately sometimes I’m not able to go out on a drive for various reasons, this time it was business involving licenses and taxes all of which are also part of life here, as they are everywhere.

This morning we had a later start as I wanted to say goodbye to our guests. The stars were fading in the sky with the advancing early morning light, all except for Venus which was still shining bright in the east. As we enter the park, I am surprised to see wildebeest so close to the camp as they haven’t been around for a while due to the number of cows. Although it is a dry morning, just a little misty, for the past couple of weeks we have had rain most days, generally in the afternoon or evening and it has been very heavy at times. This means there have been less cows in the park at night as the grass has become fresh and green everywhere. As we enter the park, there is also the smell of dead cows, those that didn’t make it. This is also a dangerous time for the cattle as they are already weak from the drought, the cold and heavy rain now are too much for the weakest of them.

As the sunrises, and the sky takes on a lovely red hue, we drive on past a large herd of Tommis’ and two separate herds of female and young Impala where the male is trying, not always successfully, to keep them all together. The going is pretty tough again and we must pick our route carefully. This morning Alison said it was best to stick to the main roads where possible as the smaller tracks are bogged down with all the recent rain, some smaller tracks are impassable, it wouldn’t do to get stuck off the main route as it would be unlikely to see another vehicle that could help.

The Sopa pride were believed to be in an area that was currently inaccessible so we drove in the direction of the blackrock females and their cubs, it would take a while because we had to stick to the main roads. The two rivers we had to cross via a bridge were very full, with areas of swampy ground where they had overflowed. As we approached the second bridge two hippos were fighting although they had stopped by the time we reached them, and they seemed peaceful enough when we arrived.

Hippo’s are huge animals and I’m sure they could do a lot of damage to each other in a serious fight. We watched as they crossed the river, walked across the road in front of us and disappeared on the other side. Just across the bridge we saw several Jackals. A vulture landed close to them, one Jackal took exception to this, even though there was no kill around to fight over, the Jackal definitely wasn’t happy with the vulture being there. 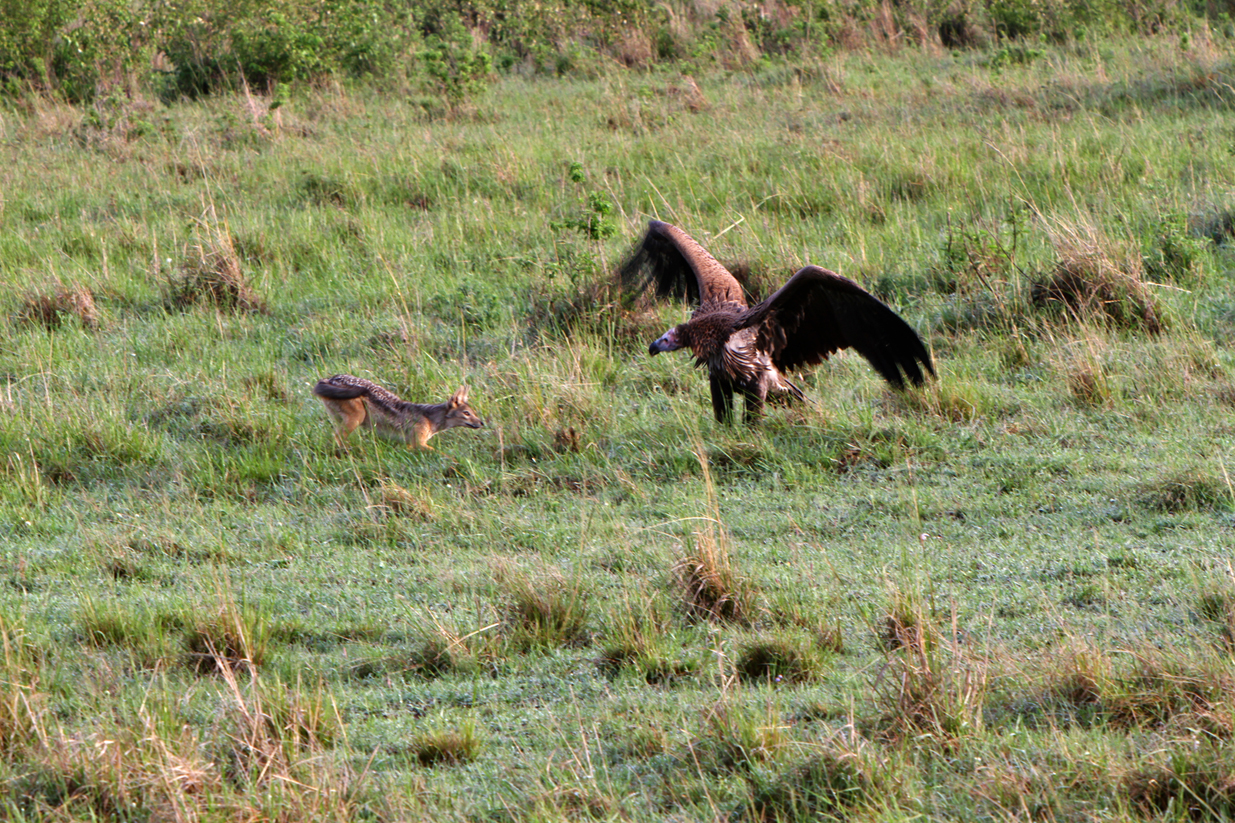 Next, we came across two elephants, just eating as they walked past, we stopped to look at these because one of them had huge tusks, well huge for the Maasai elephants anyway, the other one if you look closely has one tusk broken at the tip.

Finally, we reached the blackrock area. Now off the main road the tracks became challenging to drive on, but we managed to get up close to the females and their cubs.

By the time we reached them, they had already eaten their breakfast and their bellies were full, just the ribs of the wildebeest kill were left. Lion cubs are always very playful and curious, this group of cubs were also very chatty and kept up a constant high-pitched chattering between them. Two of the cubs were still eating bits of meat left on the carcass, one of them thought it would be fun to get inside.

There were three females around, two of the females were suckling the cubs. In a pride all the lionesses are related, and they share the task of raising cubs, so a cub can suckle from other lionesses, as well as their mother. It is so obvious when you watch the interactions between the females and their cubs just how tender and protective they are towards them and how much love they have for them.

The third female wasn’t yet a mother but did look as though she may become one quite soon. She was laying by herself under a small bush, one of the cubs had left the group and wanted to play with her, but she was having none of it. Even after being discouraged by her growls the cub still kept attempting to climb on her back, despite being thrown off a couple of times. In the end she just got up and went to find a quieter bush to lay under, leaving the young cub looking a bit bewildered.

. The female that wanted to be on her own, was the same female that was chased from a kill I posted on my last blog. The other two females chased her off so that their cubs could eat. I think she maybe a bit grumpy.

When we got to our usual breakfast stop it had already been taken, so we found another place to eat. After finishing breakfast, we only drove a little way when Alison spotted large lion footprints in a patch of fresh mud. This meant the male lions that are with the blackrock females were around somewhere, we cruised the area for about half an hour but never found them.

After this we drove over to part of the sand river that was still accessible, just to see what was there. I have put up photos of the sand river in previous posts, it is aptly named as most of the time there is more sand than water, however after heavy rains it becomes full and fast flowing, I could hear the rush of the water before we even reached it. We arrived just in time to see two buffalo running across the river, or maybe it was the car engine that had spooked them and made them run. 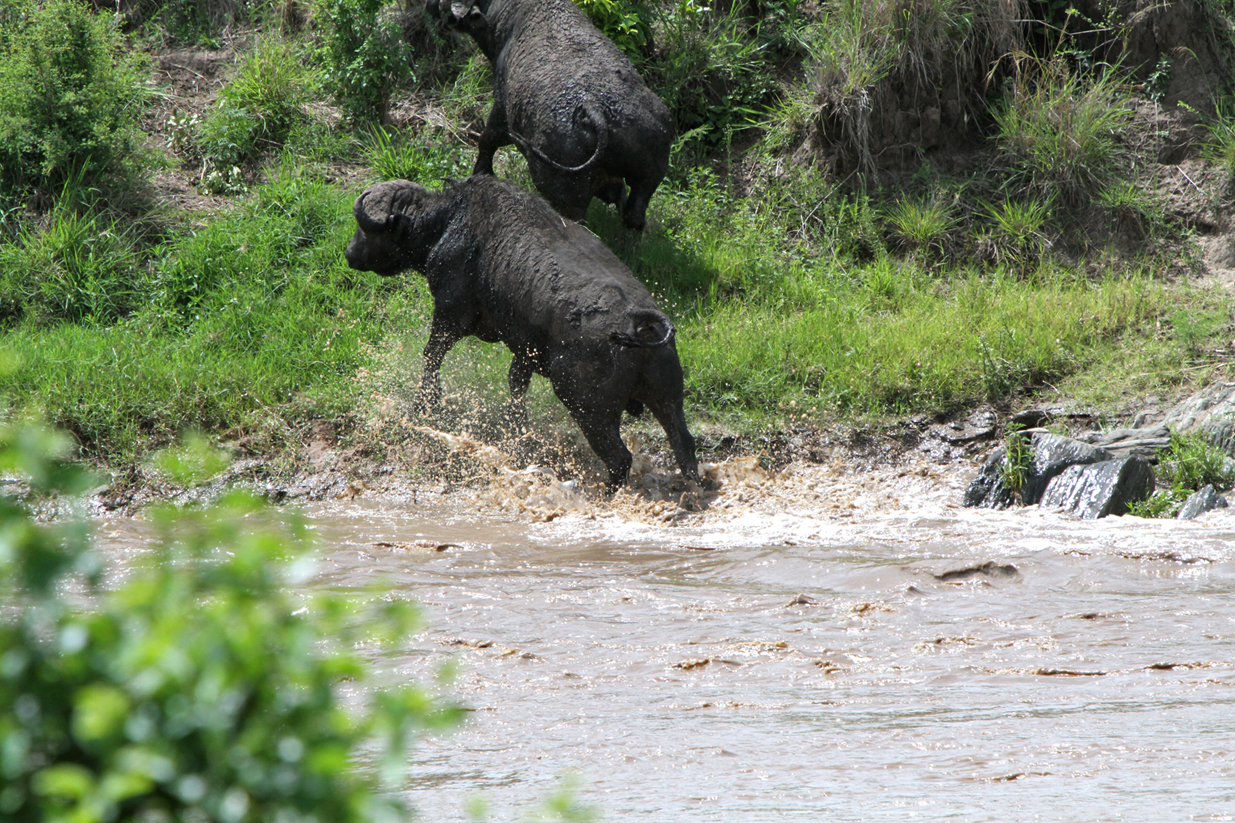 The sand river in most parts, forms the border between Kenya and Tanzania. Not far away I could see a large herd of elephants on the far side of the river, as we got closer, we could also see a few elephants on this side of the river, the herd had obviously just crossed over and it was a huge herd of, I would say, around a hundred elephants containing family members of all ages and sizes. Like during the wildebeest migration you can never capture the whole spectacle in one photo.

We waited to see if the remainder would cross, and we weren’t disappointed. There was a small group of elephants waiting for them on the other side at the water’s edge, one elephant had a baby with her that was so small I wondered how it had ever got across. I know elephants can swim when they are a couple of months old, but this baby didn’t even look as old as that. Once the last few stragglers were over, one of the elephants kept watch to make sure they were all safely across before following on to join the rest of the herd.

Just a few metres away also on the far side of the riverbank was a dead zebra, on closer inspection there was also a lion lying just a few feet from it. The lion must have grabbed the zebra as it came down to the river for a drink, and she was now getting her breath back before eating it.

Before returning to camp, we went back to have a last look for the males, instead of finding the males we were looking for, we found two sub adult males from the Sopa pride. They are getting quite big now to still be in the pride, but because there are no Alpha lions attached to the Sopa pride, they have been allowed to stay, for now anyway.