There was no crimson sky this morning, it had been raining most of the night, not heavy rain but continuous. Instead, we had low lying, thick, heavy mist that dampened all sounds. We could only catch a glimpse of the hills in front of us as the mist slowly rolls over them. Water droplets form on the windscreen as the mist condenses on the glass. There will be no sunrise to see this morning. We pass two scruffy looking secretary birds, feathers ruffled in the damp air.

For two hours we don’t even see another vehicle, but as the mist begins to lift Alison notices a large troup of baboons, so we take a short detour and head over to see them. This is a large troup indeed, around 40 to 50 members hanging out in a large healthy tree, a long dead fallen tree and all over the ground in between the two.

They were just doing everyday baboon things such as grooming and foraging, the young ones were playing games, chasing each other, play fighting, swinging out of the trees, hanging upside down and generally performing all sorts of acrobatics, they were very amusing especially when one of the dead branches gave way and fell to the ground, this caused panic and alarmed the young ones and they fled to the other side of the fallen tree.

In the other tree One of the large male baboons was chastising some of the smaller ones, keeping them in line by a lot of screeching and chasing them to the very tips of the branches where they held on only by their fingers, one young one didn’t hold on well enough and dropped to the floor like a stone.

After watching them for a while we head out across the vast plains, towards the Talek area to see if we can find the coalition of three male cheetahs known as tatu bora. They are just off the main road in the shade of a clump of bushes, two other vehicles were watching them when we arrived, not that they were doing anything much or even looked likely to do anything. Their bellies looked quite full, so I guess they had eaten something either yesterday evening or early this morning.

They were just relaxing, it was a very peaceful scene, that is until two hyenas crossed the road and headed over towards the cheetahs. As the Hyena approached them, they jumped up out of the bush hissing and spitting. Cheetahs are afraid of Hyena because Hyena have very strong jaws that can seriously injure or kill them, so the cheetah would prefer to run. However, since there was no kill involved the Hyena paid the cheetahs little attention and just settled down in the recently vacated bush leaving the cheetah to just look on in disgust.

After this we headed back across the plains to the blackrock area as we wanted to see how the blackrock females were doing with their cubs. The driver chose to use the small roads that are just tracks of thick black mud filled with water, snaking across the ground ahead of us. It is really difficult to drive on these tracks as the back wheels keep losing traction and sliding first one side and then the other when the driver tries to correct the steering.

We came across the cubs first, they were hiding in bushes that surround the rock where we generally take breakfast, I call it our breakfast rock. Well, we could only see three of them, one of the older cubs looking after two of the smaller cubs, but we knew the others wouldn’t be too far away, just more carefully concealed. Alison said that the mothers would be somewhere in the area looking for a meal for the babies, that’s why they are alone. So, we start our search.

We eventually found them not too far from where they had hidden their cubs. Six females resting in the small amount of shade offered by a couple of bushes, since it was close to mid-day and the sun was directly overhead there was not much shade to be had. After looking around we could see that there was nothing much for them to eat, Alison pointed to a large herd of buffalo in the far distance saying he thought they might head off in their direction, and sure enough it wasn’t long before one of the females starts to move.

I found it hard to believe that they would travel all that way for a meal. The other females started to get up one by one and follow her lead. There was no track where they were headed so we had to go back and find one that would bring us out close to where we thought they would come out. We reached the main road just before they did. They crossed the main road, still heading towards the buffalo and stopped to rest on a couple of mounds that were located not far from the road, giving them a good view of the buffalo. The buffalo were still some distance away but were slowly making their way towards us and so closer to the waiting lions. 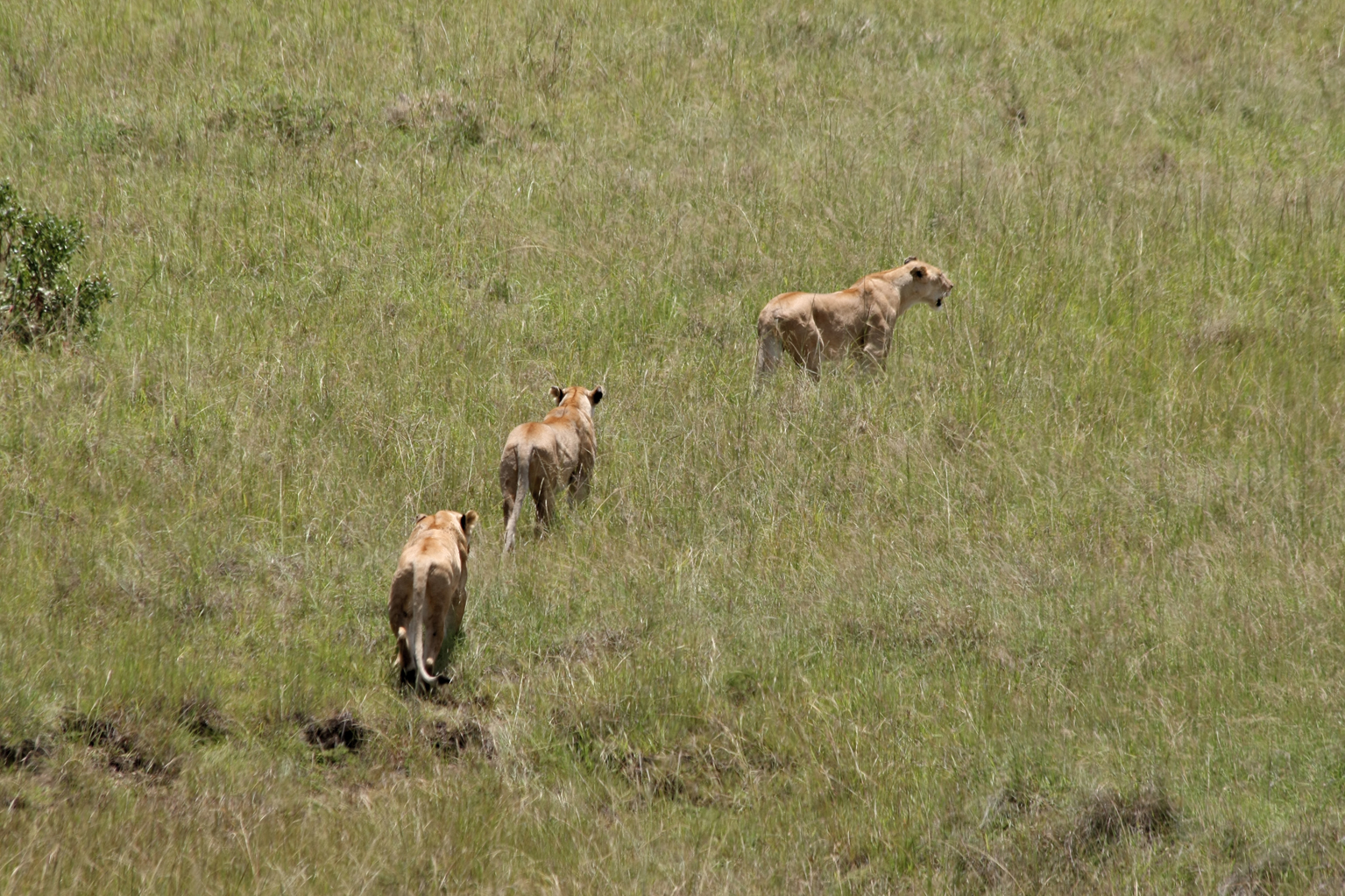 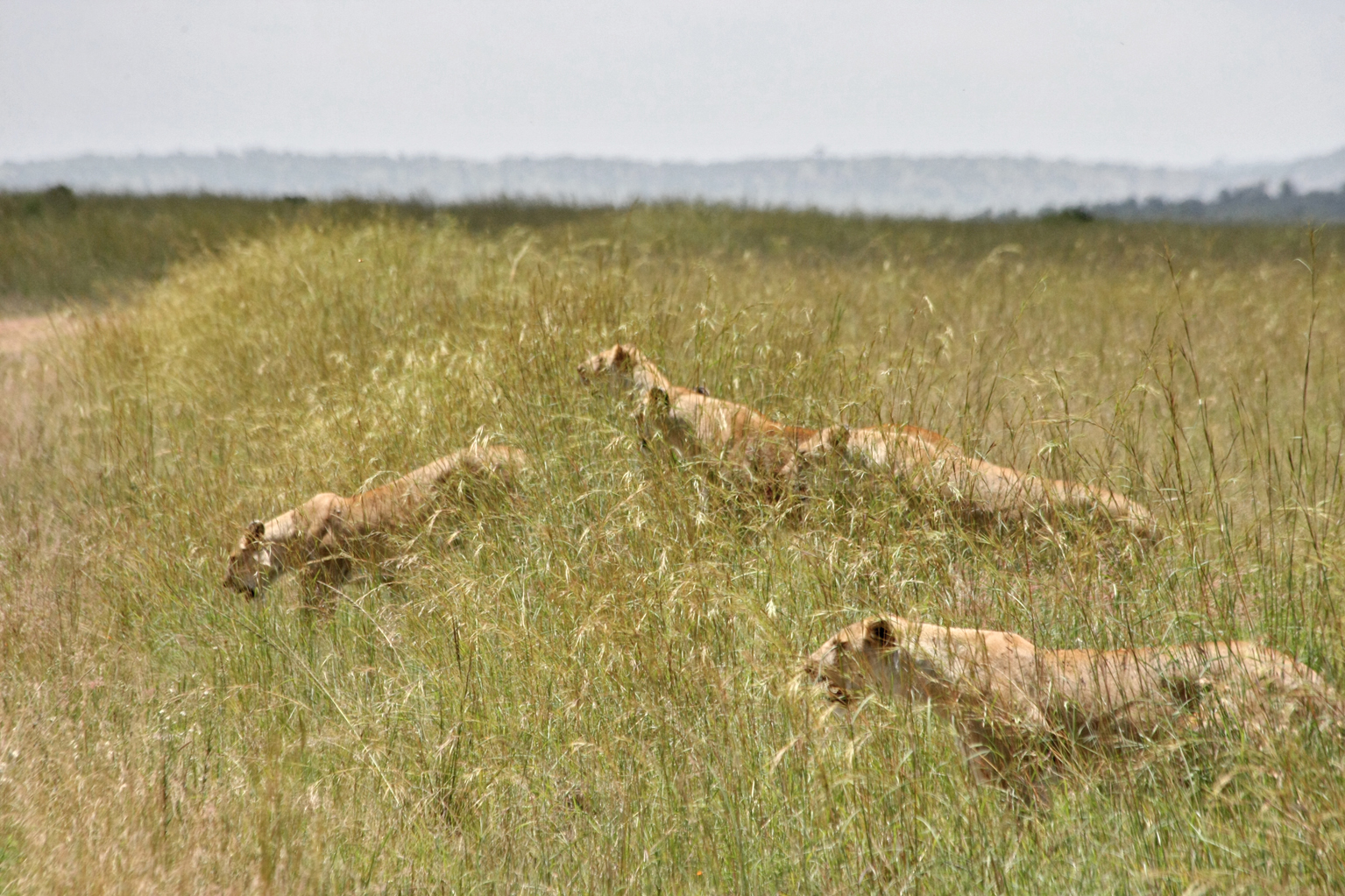 The only way to see a lion kill is to be very lucky and turn up at the right moment or very patient. The driver places our car near the start of the track so that when the lions do go in for the kill, we can follow them quickly. The only question now is will they make their move before the park closes and what to do while we wait, so we take lunch, then a short nap. After three hours of waiting Ken is a little skeptical that the lions will go for the buffalo, but Alison insists that they will, as he explains, they must because they have to feed their many cubs, a smaller animal won’t satisfy them, they need a buffalo. The buffalo who had been making their way in a single line had now bunched up and were sitting in the long grass, still what I thought of as quite a distance from the lions.

Just then Alison noticed a lone buffalo that was following the others but was way behind and seemed to be limping a little which meant he was injured and an easy target. “That is the one he is going for” he stated. The lions had also seen him and had now moved from their vantage point and hid in the long grass, we could no longer see them but could guess their general position.

Meanwhile a few vehicles had approached us to find out what we were looking at, when they were told there are 6 lions out there that may be going to hunt, but since they couldn’t see anything they continued on their way. It wasn’t until around 5 o’clock that first one vehicle, then another one decided to wait with us. We were the patient ones, and they are what I have called the lucky ones because after just 10 minutes the lions made their move.

We saw one lion approach the injured buffalo, we raced down the track keeping pace with the other lions. I think lions are very smart, at least this group of females are. The first lion was keeping the buffalo’s attention while the other crept up alongside. A single lion is no match for a buffalo as they fight back and can cause serious damage, so at first, I think the buffalo wasn’t too concerned, but once the others arrived it was all over for him.

First one jumped on his back, then another from a different direction, very soon they were all over him, the buffalo didn’t know which way to turn. It was all over in a few minutes, they had him down and were already taking bites out of him before he stopped kicking and lay dead beneath them. These lions are savage killers.

Immediately he was dead two of the lions left the kill to go and get the cubs while the others continued to eat.

It was a long way back but there was enough meat on that buffalo for everyone. Considering the distance they had to travel they made it back surprisingly quickly, we had just got to the cubs in time to see the lions coming over the hill. The cubs had been waiting a long time but like us, their patience had now been rewarded.

They came out over the rock from all directions running straight to the sound of their mother’s call. They were so delighted, running and jumping all over the mothers. After much excitement the mothers then started to lead them towards the kill.

This is where we left them as we now had to rush to leave the park before it closed.