I’m excited this morning, we have decided to go on a game drive, conditions are still pretty bad in the park and there are large areas that it’s not wise to go to, but we will see what we will see.

There is a lot of mist in the air this morning, it makes the sky in the east a beautiful crimson colour where the sun is about to rise. In minutes it changes to a vibrant orange, then yellow before the sun appears above the horizon diffuse in the heavy mist.

We leave camp by the top road this morning, this is where Alison keeps his cows, one of which is mine, with a small shed for the calves to keep them safe at night. For the last three nights there has been a lioness in the area looking for an opportunity to have one of the cows for a meal, they are an easy target. Half an hour after leaving the camp Alison gets a phone call to say that the lion has got one of his calves, they had just been let out to play and one of them wandered over to some bushes when the lion rushed out and grabbed it, when they saw what had happened the Maasai chased the lion away, but unfortunately it was too late for the calf. So far, over three nights the lion has claimed two cows, a calf, and a donkey. 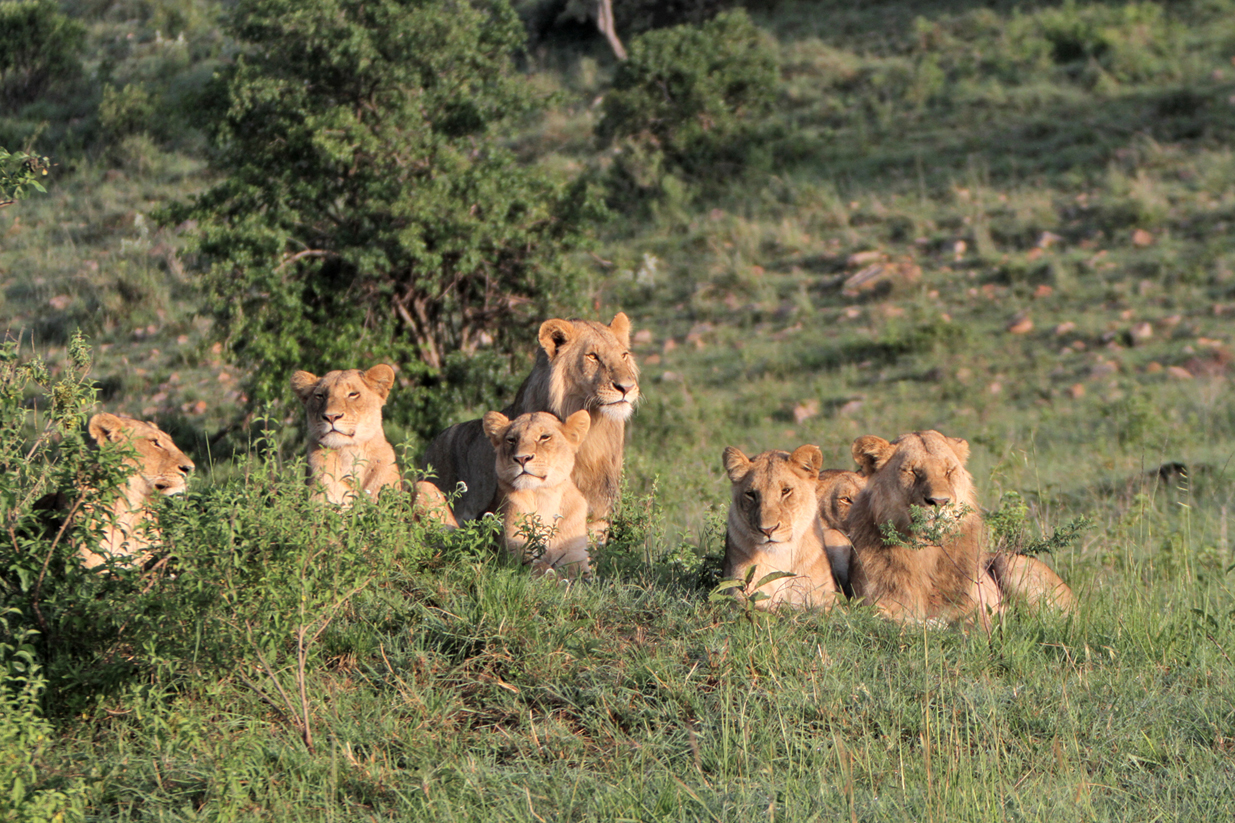 Sticking to the main roads as much as possible, we see three vehicles in front of us turn off onto a muddy track, so we do something we don’t normally do, we follow them. After all, in these conditions no driver would choose to use a mud track and risk getting stuck if there wasn’t something to see other than zebra and antelope. At first it just looked like a couple of lions, then on closer inspection of the area we picked out another, then another until altogether there were twelve of them. This is one half of the Sopa pride.

The Sopa pride was one of the largest prides in the Mara numbering forty-two, just before the pandemic they split, forming two groups, we were looking at the smaller of the two groups. There are no young cubs in this group, not yet anyway, but there are several male sub adults that have not yet left the pride. You can see from the photo’s that they are growing into fine males and I’m sure it won’t be too long before some of them will want a pride of their own.

This morning they haven’t yet eaten, and they are looking around, after a short while they start to move, first the lead female, then one by one they get up from their resting places and follow until the whole pride is on the move. It’s really something to see a pride of lions striding confidently across the land, like it belongs to them, and it is their land no question. We follow them as they head down to the river and across the bridge paying no attention to all the jeeps that are piling up behind them.

They head into thick bush Alison still thinks they may hunt, so we drive ahead, guessing where they may come out.

We get a clue from a herd of Giraffes. Being tall they can easily spot the lions from quite a distance and although they don’t run from lions they do stand and stare at them, never letting them out of their sight. This means we could be sure from which direction the lions were coming. Lions won’t attack fully grown Giraffe, especially when there is a group of them as they have a powerful kick that can seriously damage or even kill a lion. Close by was a herd of Topi including a few babies that were sticking close to the Giraffe for protection. 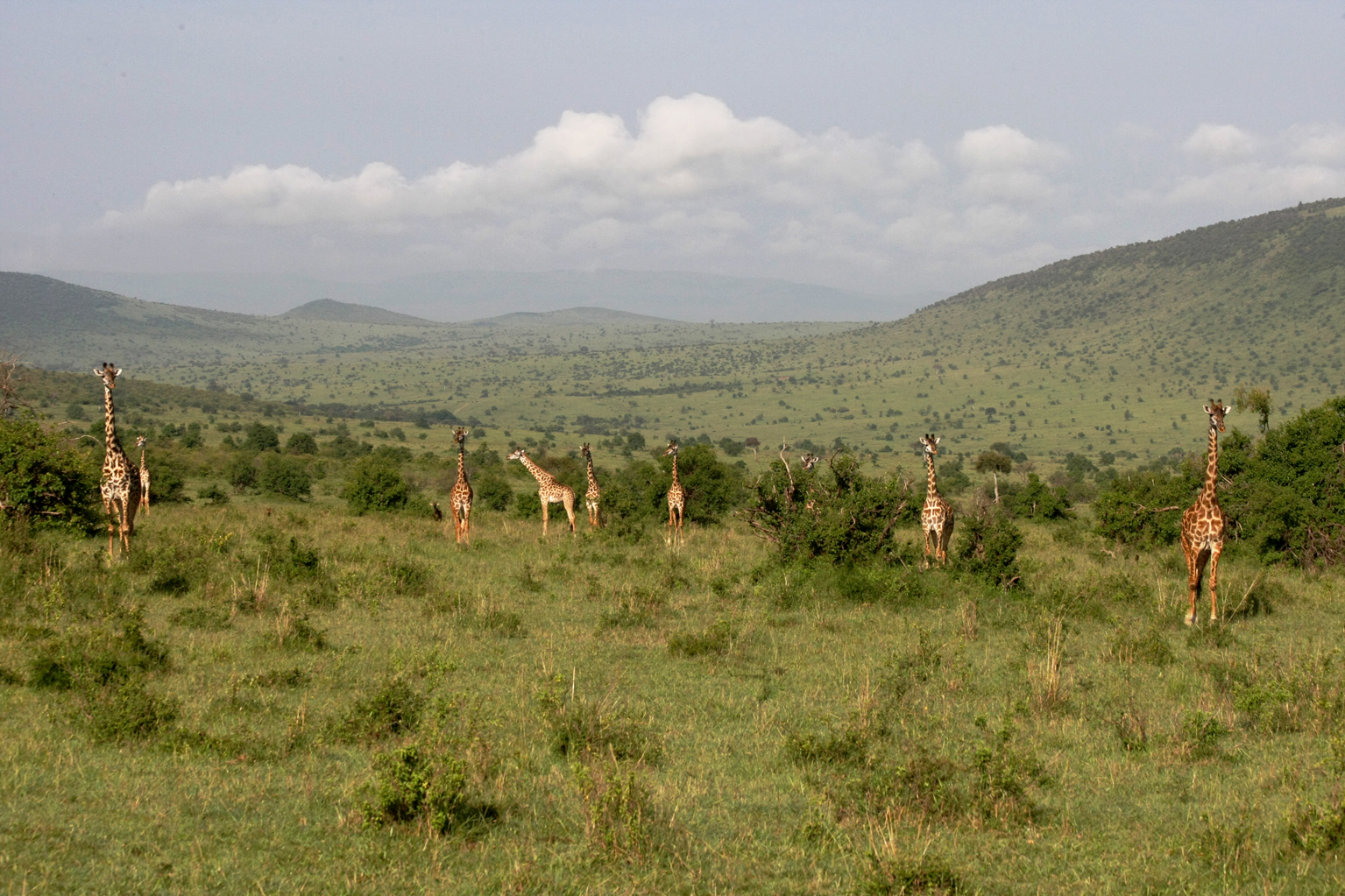 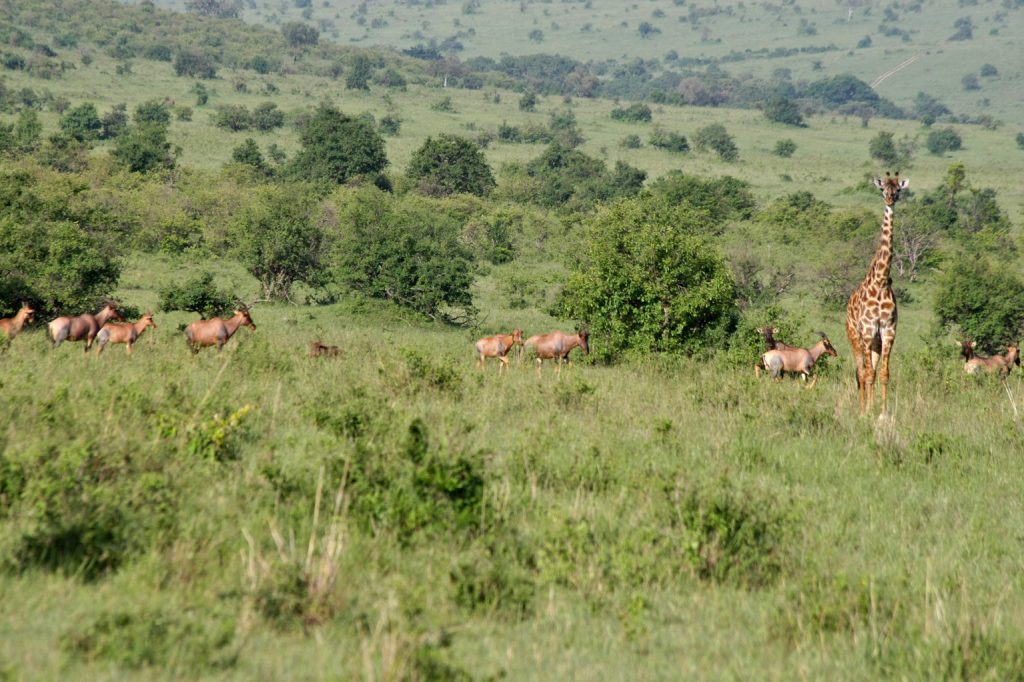 Alison pointed out two large male warthogs that were fighting. Warthogs generally fight for mating rights and for dominance. They face each other head-to-head then push each other to see who yields first, however it can get nasty when they use their sharp tusks to try and topple their opponent, you can see the warthog on the right has been punctured by a tusk just above his leg and is bleeding. The two were so involved in their fight that they were oblivious to the drama unfolding to their left.

The lions had arrived and were chasing the rest of the warthog family who managed to escape into their den before the lions reached them.

That didn’t stop a couple of the lions trying to get down into the den after them. Once the two male warthogs realized what was happening, they stopped fighting each other and took off. It doesn’t matter who is the stronger when there are lions around.

The lions hadn’t managed to get a meal and the day was getting warmer so instead they settled down for a rest in the shade of a tree, maybe they will try again later in the day.

There we left them and headed off towards the Talek area to see if we could find the three cheetahs, Tatu Bora.

When heading toward Talek the landscape changes from an area of rolling hills and thick bush to immense expanses of wide-open plains covered in tall grass due to the recent rains. Only last month this grass was like straw laying flat on the ground, now revived by the rains is standing up straight in vibrant greens and browns, making it difficult to spot any wildlife that may be there.

Every now and then a bird is spotted, like the secretary bird, the grey crown crane and the ostrich that stalk through the long grass looking for insects. Sometimes you see horns of the antelope sticking up out of the long grass where they are very well hidden. Occasionally you see one standing like this very lovely waterbuck who is in his element in this waterlogged terrain.

The cheetahs have been spotted in an area that is accessible for a 4-wheel drive, but only just. The tracks in the Talek area typically turn to thick black, slippery mud. When we arrive, there are already around 30 Jeeps surrounding and following the cheetahs, all vying for space, how these vehicles didn’t slide into each other I don’t know, I saw one jeep do a 360 degree turn before the driver got it under control again.  I think there are so many vehicles because the areas that are still accessible are few in these conditions, so everyone ends up at the same place.

I felt sorry for them, we took a couple of photos then left. It was now time for lunch, so we headed over to the sand river area leaving the madness behind.

The morning had been very enjoyable. I will write about the afternoon adventures in the next blog.