There was thick cloud cover this morning as we set off. It had been raining a little overnight, so the going was tougher than usual. It was a very quiet morning as far as animal sightings were concerned, just the usual zebra, wildebeest, and antelopes, although there were quite a few babies around, which is always nice to see. The zebras are unperturbed by the tourist vehicles, even the babies, they mostly don’t run when you get close, however the Topi are more skittish, as we drove past, the mother took off running, with the baby Topi close on her heels.

Our route took us across a small stream and across hilly terrain scattered with loose rocks. As we crested one of the hills, there appeared a herd of buffalo in the distance and just then the sun broke through the blanket of cloud, its rays spreading out over the land highlighting the tops of the bush. I closed my eyes and felt the warmth on my face, at this moment I could think of no place I’d rather be, than right here, right now.

On our drives we rarely go near the main roads preferring to go to the less visited areas, this is where we usually find the Sopa pride. This morning we drove around the area where we would normally find them but there was no sign, we were about to give up and drive to a different part of the Mara to see if we could see leopard, when we happened upon another vehicle. As is the custom when vehicles meet, the drivers exchange information, although we had no information to give this morning, the other driver had seen the Sopa pride down by the sand river.

The route we had to take to reach the pride involved going up a fairly steep hill and then down the other side. We stopped at the top while the driver assessed the best way down, there was a track, if you could call it that, just visible amid the overgrown bushes and grass, not to mention it was littered with loose stones, so it was decided we would take that. As we looked around there didn’t seem to be anything down there and I only hoped it was going to be worth our while. The drive down was difficult the track was lined with sweet smelling bushes which made the trek very pleasant.

Our guide had already spotted some of the lions, they were dotted all over the area lazing around under different bushes, some sleeping, some playing half-heartedly but all with full bellies, which was not surprising as on the far bank of the river a large herd of zebra were grazing. we drove from bush to bush checking how many of the pride were here. For someone whose whole life had been spent in a city it was a weird feeling knowing you are surrounded by a large group of around 20 lions.

While we were searching we came upon the cheeky young male that was so inquisitive the last time we saw him when he took a bite out of our tyre cover. He was resting, alone under a bush, we drove up to him, which he clearly didn’t appreciate as he immediately got up and walked away, that’s when we noticed he was limping quite badly, although there were no obvious signs of injury that we could see, he couldn’t put any pressure on his front left paw. I only hope it wasn’t broken.

As we got closer to the river, we could see some of the pride stretched out on the sandy bed. It is easy to see where the sand river got its name from, it is literally like a river of sand with shallow rivulets of water running through it. This seemed to be a perfect spot for the lions, they were secluded, they had plenty of shade, water to drink from the river and plenty of food on hand. I wouldn’t be surprised if they stayed put for at least a few days.

After a little while we decided to leave the pride in this idyllic setting to go and see if we could find any of the Sopa males. We headed in the direction we had last seen one of the males when he was with one of the blackrock females and her cubs. After spending about an hour looking all over the area, we couldn’t find any sign of him.

Then Alison noticed several vultures circling and thought it might be worth a look to see what had drawn their attention. He thought it may be a lion kill and the lion may be present. We drove over to where they were landing and indeed it was a kill, a zebra, which was surprisingly whole. Normally when the vultures get to eat there is not much left. This time the prey was mostly intact but no sign of any predator, so I guess that whatever killed the zebra was either chased off or just wasn’t very hungry.

Since we were starting to get hungry ourselves, we decided to leave it until another day and head back to camp. As usual there were a few bird sightings on the way back. Next to a shallow waterhole we found the largest bird, the ostrich. The ugliest bird, at least in my opinion, the marabou stork and another wading bird, the hamerkop, which gets its name from the shape of its head. 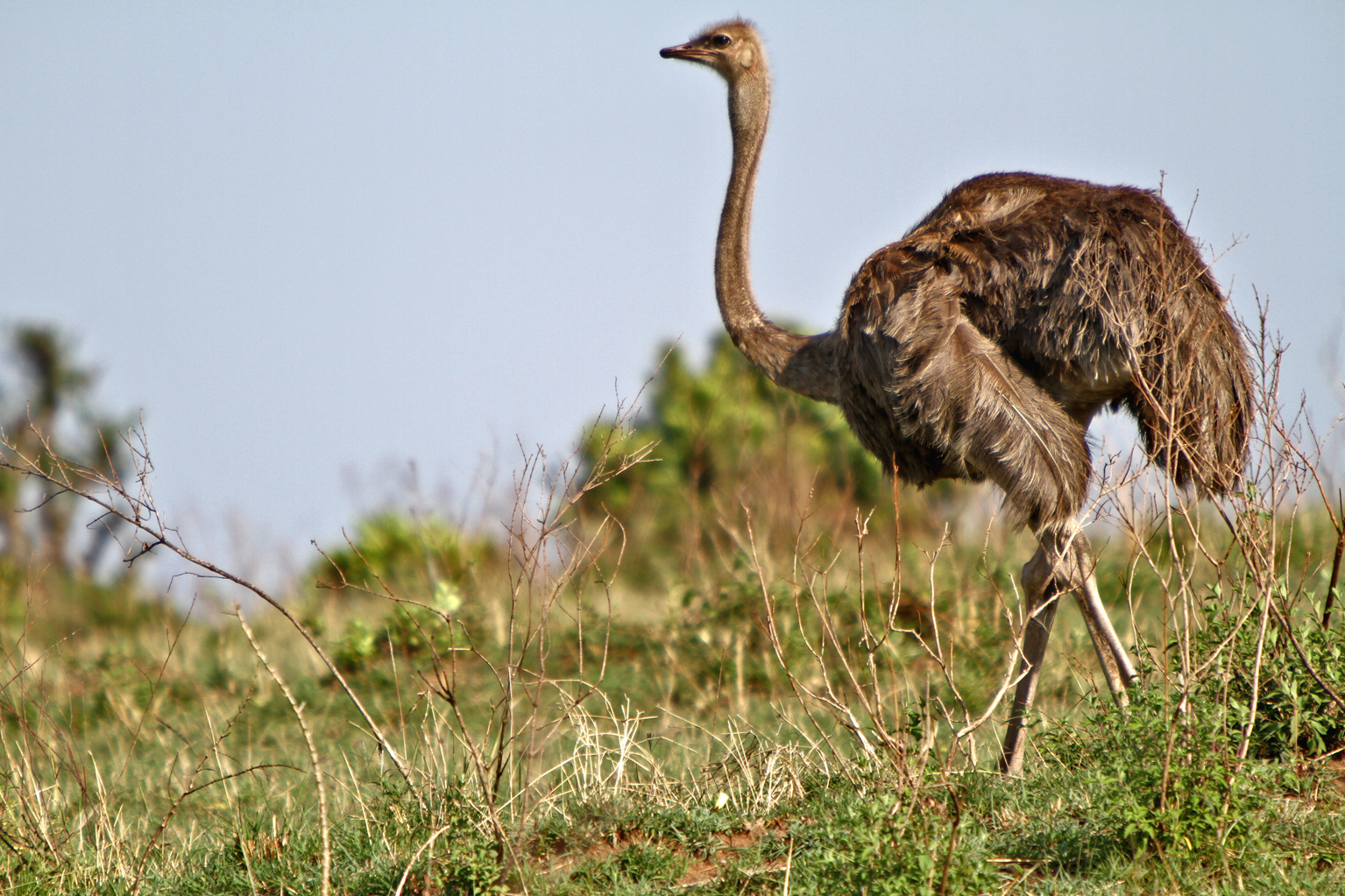 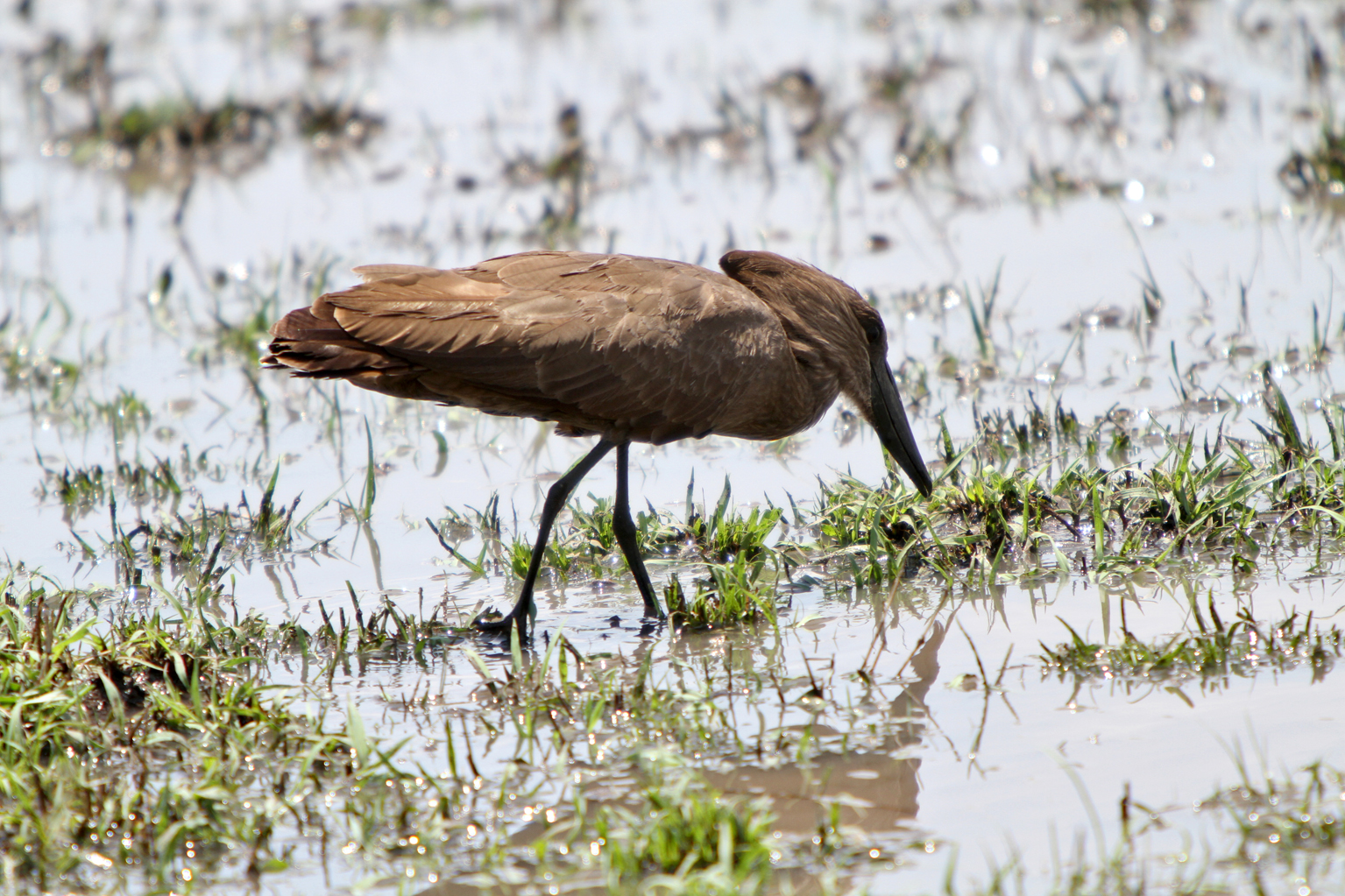 One reply on “Relaxing on the river bed”